The Defense Health Agency will host an industry briefing offering federal contractors a glimpse into its plans to consolidate and modernize information technology services at 1,200 Military Health Service sites and 600 treatment facilities around the world, according to a Dec. 10 agency update.

DHA issued a request for information on Sept. 23 seeking input from industry on a broad range of managed IT services, from managing the departments networks and software lifecycles, to performing cybersecurity operations, to servicing its employee-issued desktop and laptop computers. The proposed contract, known as MHS Enterprise IT Services, will centralize a number of the department’s current IT contracts onto a single-award blanket purchase agreement (BPA), according to a summary of the agency’s market research attached to the announcement. 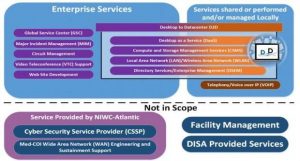 DHA officials will hold an industry briefing via teleconference on Dec. 16 from 3:00-4:30 pm EST to provide federal contractors an update on the agency’s proposed acquisition strategy and take questions from interested parties. The agency plans to release a draft request for proposal in April 2020 and award a contract by the end of October, according to an attached slide presentation.

Since the start of fiscal 2015, DHA has obligated more than $4.4 billion on IT contracts. Although DHA officials haven’t released an official ceiling value for the contract, based on the scope of requirements, Bloomberg Government projects it could be worth more than $1 billion over ten years.

The plan will support DHA’s mandate to reduce the scale and complexity of its IT services, as directed by the FY 2019 National Defense Authorization Act (PL 115-232). It will also coincide with efforts to centralize IT operations within the Defense Department’s non-military “fourth estate” agencies, according to the slide presentation.

There are currently 373 active IT-related task orders at DHA — worth a combined $1.4 billion as of Dec. 12 — expiring between now and the end of fiscal 2021 that could be put at risk by plans to centralize MHS IT services under a single-award BPA. The top recipient under the current contract structure is Leidos Holdings Inc., whose 20 task orders have generated a combined $608 million. Based on the size of its IT footprint at DHA, as well as at other government health agencies, Leidos will surely be considered a contender for the award.

Leidos was one of twenty companies DHA invited to participate in follow-up meetings after the September sources-sought notice. A complete list of interested parties can be found here.