The Defense Department will pivot to a new enterprise cloud contract after canceling its embattled $10 billion cloud award to Microsoft Corp.

Instead, the Pentagon will split the work with Microsoft, Amazon Web Services Inc., and possibly three other U.S. providers, senior Pentagon officials announced.

Microsoft and AWS are the only two vendors capable of meeting the Pentagon’s cloud requirements, Acting Pentagon chief information officer John Sherman told reporters Tuesday. Awards could come as early as 2022, he said.

Pentagon leaders launched the Joint Enterprise Defense Infrastructure cloud program in 2017. The U.S. military, a prolific producer and consumer of data, envisioned JEDI as its “general purpose” cloud, the main data repository and a replacement for aging, siloed information systems.

By shifting resources to high-performance data centers companies such as Microsoft and Amazon run, Pentagon planners aim to simplify sharing information between headquarters and front lines, enable use of emerging artificial intelligence technology, and gain a tactical edge, or advantage, on the battlefield.

The Pentagon’s decision in October 2019 to award the contract to Microsoft, seen as the underdog in the race for the $10 billion contract, established the software giant as a legitimate competitor in the secure cloud market, long dominated by Amazon. Multiple challenges in federal court — the most recent Amazon’s allegation that then-President Donald Trump interfered in the contracting process — delayed the program by more than a year.

The Pentagon faces a growing gap between the needs of U.S. forces and the cloud capabilities at hand, and the prospect of a year or more of potentially damaging litigation. 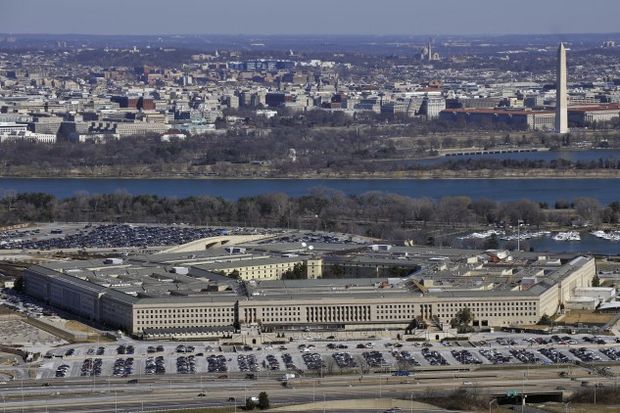 Photo: Senior Airman Perry Aston, 316th Wing Public Affairs via DVIDS
The Pentagon with the Washington Monument and National Mall in the background.

The department plans to replace JEDI with the Joint Warfighter Cloud Capability. The JWCC will offer “enterprise-scale, commercial cloud services at all three classification levels that work at the tactical edge,” Pentagon spokeswoman Jessica Maxwell said in a statement.

The fresh start offers Amazon a pathway back to the center of the Pentagon’s cloud strategy — and potentially billions of dollars in revenue.

Over the next three months, Sherman and officials with the Pentagon’s Cloud Computing Program Office will meet with the other three U.S. hyperscale cloud providers — Google Inc., Oracle Corp., and International Business Machines Corp. — to assess their eligibility for additional JWCC awards.

All three were eliminated from competition for JEDI cloud, lacking either the global scale required to meet the Pentagon’s needs or the requisite security certifications.

Pentagon officials plan to award JWCC contracts to Microsoft and Amazon on a limited-source basis, claiming they’re currently the only vendors capable of meeting the military’s requirements. Typically, federal agencies are barred from hand-picking contractors without competition. Sherman framed the JWCC as a “bridge” contract — a temporary arrangement in response to an urgent need until a proper competition is possible.

The Pentagon’s aim is to replace the JWCC with a fully competitive, multi-cloud acquisition as soon as early 2025, Sherman said. It will be “in the billions of dollars,” though there isn’t a precise cost estimate yet, he said.

No company benefits more from the decision to scuttle the JEDI program than Amazon. The company’s $600 million Cloud Computing Services (C2S) contract with the Central Intelligence Agency was widely seen as the blueprint for JEDI.

The initial award to Microsoft “was not based on the merits of the proposals and instead was the result of outside influence that has no place in government procurement,” Amazon spokesman Drew Herdener said in a statement to Bloomberg Government. The company looks forward to continuing to support Pentagon modernization, the spokesman said.

“Much the of the value of the JEDI win was that it showed large customers they could trust Azure for tasks where they had previously only considered Amazon Web Services,” Mark Moerdler, an analyst with Sanford Bernstein & Co, told Bloomberg News in an interview. “Microsoft Azure has gained massive credibility inside and outside the US government and that will not change.”

The Pentagon “trusts Microsoft and our technology, and we’re confident that we’ll continue to be successful as the DOD selects partners for new work,” Toni Townes-Whitley, the company’s president for U.S. regulated industries, wrote in a Tuesday blog post.

In 2020 when millions of Pentagon employees and contractors were forced to work remotely throughout the Covid-19 pandemic, officials turned to Microsoft for cloud-based video conferencing and collaboration software. In March 2021, the U.S. Army offered Microsoft a $22 billion contract extension to produce thousands of its Hololens devices for U.S. service members.

Microsoft also provides the U.S. military bespoke cloud services known as “fit-for-purpose.” These smaller cloud programs, such as the Air Force’s Cloud One and the Joint Artificial Intelligence Center’s Joint Common Foundation, offer military personnel specialized software or data capabilities. Both Cloud One and the Joint Common Foundation rely on services from both Microsoft and Amazon.

Microsoft booked roughly $1.5 billion in defense contracts during fiscal 2020, including direct sales as a federal contractor and third-party sales of its products, Bloomberg Government data show. That’s about 50% growth, compared with $998 million for the the company in fiscal 2018.

With assistance from Dina Bass

To contact the reporter on this story: Chris Cornillie in Washington at ccornillie@bgov.com

To contact the editors responsible for this story: Robin Meszoly at rmeszoly@bgov.com; Heather Rothman at hrothman@bgov.com