Several Republican senators facing competitive re-election races recently signed on to a bill that aims to prevent mass shootings without putting any major limits on firearms.

The move underscores changing public views on guns in the face of recent killings and the need for these incumbents to communicate to voters a nuanced view on the issue.

The legislation’s (S. 2690) sponsor, Sen. John Cornyn (R-Texas), and three co-sponsors, Martha McSally (R-Ariz.), Joni Ernst (R-Iowa) and Thom Tillis (R-N.C.) are all running next year in states President Donald Trump carried in 2016 and that Democrats are targeting next year in the battles for both the White House and the Senate majority.

“The most important thing is to show that we care and we’re trying to come up with some answers,” Cornyn said in an interview. “It’s an enormously divisive topic.”

Cornyn portrayed the bill as a response to the August shootings in the Texas cities of Odessa and El Paso that left a combined 29 dead. The legislation would crack down on unlicensed sellers of firearms, bolster mental health resources, and incentivize schools to monitor the online usage of students at risk of harming themselves or others.

None of the bill’s eight sponsors are Democrats. One of Cornyn’s most prominent Democratic challengers, Air Force veteran MJ Hegar, quickly criticized the legislation for not going far enough. 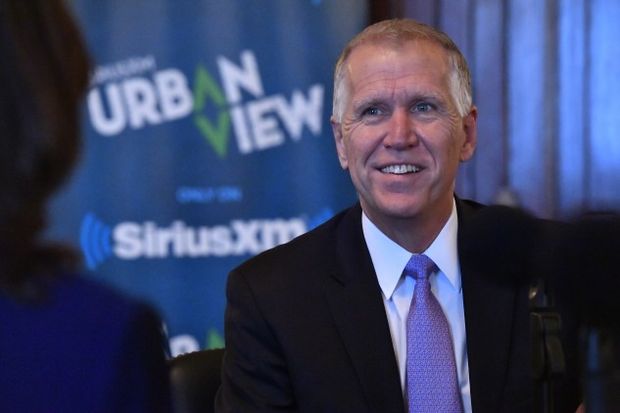 “It’s more of a matter of being reasonable about it and recognizing there’s a way to strike a balance,” said Tillis, adding that former Democratic presidential candidate Beto O’Rourke’s plan to ban assault weapons was a “not productive dialogue.”

“It’s a matter of going back and communicating to those who are concerned,” he said.

The bill’s attempt to strike a balance of addressing mass shootings while maintaining clear support for the Second Amendment illustrates how the politics around the issue has shifted in recent years, said Stan Barnes, a GOP strategist in Arizona and a former state legislator.

“When I got into politics as an elected official 30 years ago, Republican candidates answered the question, ‘Where are you on guns?’ by saying ‘I’m pro-Second Amendment,’” he said. “Today the Republican politicians are not so cavalier with that kind of an answer. The answer the average voter wants to hear is a more complicated answer than simply, ‘I’m pro gun.’”

Divide Between Violence and Guns

The shift has accompanied a proliferation in mass shootings in recent years. As of Thursday, there had been 372 instances this year in which four or more people were shot or killed by a gun, according to the Gun Violence Archive, a nonprofit collecting data on gun violence. The number of mass shootings in 2019 is slightly higher than the previous two years but hasn’t reached 2016 levels.

This is an issue that is front and center in our country’s consciousness,” said Brendan Steinhauser, a GOP strategist who ran Cornyn’s 2014 campaign. “We’ve had a number of these instances that have happened, so people are paying attention and people are asking what are you doing to try to solve these problems.”

The share of Americans who favor stricter gun laws has increased to 60% in September from 52% in March 2017, according to the Pew Research Center. But stark partisan divisions remain. While support for banning high capacity magazines increased among Republicans, independents and Democrats in recent years, only half of Republicans surveyed said they supported a ban on assault-style weapons and 54% supported a ban on high capacity magazines. Nearly nine in 10 Democrats supported both.

Conversely, overwhelming majorities in both parties (93% of Democrats and 82% of Republicans) said they supported extending background checks to private gun sales and sales at gun shows.

A similar party divide trend has appeared at the state level. A Texas Tribune/University of Texas poll conducted last month found support among registered voters for stricter gun control laws has increased in both parties and among independents. But when broken down by party, four in five Democrats said gun laws should be stricter compared with only a quarter of Republicans and, notably, 45% of independents.

“Most voters in the middle, they see a problem, they want a solution,” Steinhauser said.

Everytown for Gun Safety advocates for universal background checks and other gun control measures. Michael Bloomberg is the majority owner of Bloomberg Government’s parent company and serves as a member of Everytown’s advisory board.