The pharmaceutical industry is ramping up its Washington presence as it faces pushback from Congress and the Trump administration on how much it charges for medicine.

“There has been a real shift in the political landscape around drug pricing,” said Jon Conradi, spokesman for the Campaign for Sustainable Rx Pricing (CSRxP), a coalition that includes insurance companies, pharmacies, doctors’ groups, and hospitals.

“It’s reached that tipping point that lawmakers in Congress are more concerned on delivering on the demand from American patients and consumers than than they are with the big pharma lobbyists and the industry,” he said in a telephone interview.

Drug manufactures and other business interests are pushing back, arguing that some of the proposals could have unintended consequences and may stifle innovation.

Last year, drug companies and their trade association spent more than $206 million, the highest amount since 2009,when Congress was debating the Affordable Care Act, according to a Bloomberg Government analysis of lobbying disclosures. 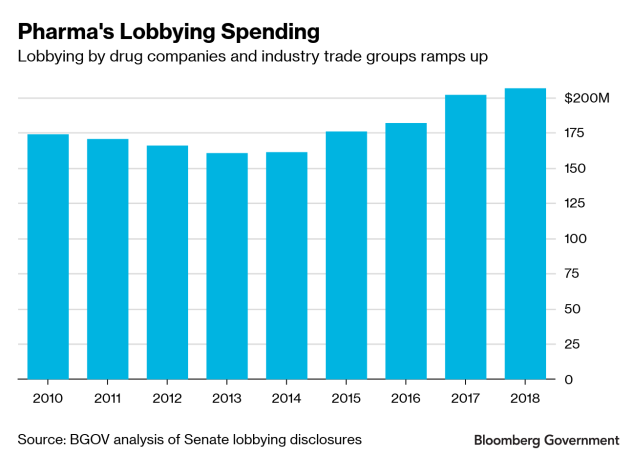 Drug pricing was specifically mentioned in at least two dozen new lobbying registrations since the beginning of 2018, including hires made by drug companies, pharmacies, insurance companies and others. Dozens more lobbying hires during that same time by drug-makers list work on intellectual property, and health care or pharmaceuticals in general.

One of those new hires, Marshall & Popp, is a new firm led by former top aides to Cornyn and Senate Majority Leader Mitch McConnell (R-Ky.). Miller Strategies, another firm the company hired in January, has
both a lobbyist close with House Minority Leader Kevin McCarthy (R-Calif.) and a former Trump White House official working on the account.

Both Sanofi and Walgreens have hired public affairs firm Forbes-Tate, which offers lobbying and public relations in addition to grassroots advocacy. Since the beginning of 2018, Sanofi has also brought on a total of three new firms.

“GoodRx is aligned with the American consumer, and working hard to make sure Americans have access to affordable medications,” said Libby Baney, a partner at a firm and one of the lobbyists on the account.. “While they don’t have a position on the various policies being discussed, GoodRx does believe that pricing transparency helps people make better healthcare decisions.”

The pharmaceutical industry needs both to sway the opinions of Washington newcomers and keep the allegiance of longtime allies. But the tides may be changing.

For instance, the members of the GOP Doctors Caucus traditionally have had a favorite view of the industry in which they all used to work.

But when a drug industry representative met with the caucus in December, lawmakers were uninterested in bucking the Trump administration’s proposal to tie what Medicare pays for some drugs to their prices in other countries, according to Sen. Bill Cassidy (R-La.), a doctor and former professor of medicine who attended the meeting.

“One of my very conservative colleagues — as the fellow from PhRMA was finishing up — he leaned back in his chair and said, ‘Tell me one more time why we pay so much more than the French,’” Cassidy said.

The Trump administration has proposed launching a pilot program that would implement international reference pricing, tying what Medicare pays for medicines to their price in foreign countries.

Brand-name and generic drug manufacturers know they’re not going to stop congressional inquiries or efforts to legislate on drug pricing, industry lobbyists said. They’re hoping to influence what bills might make it the president’s desk.

That strategy was on display last week when the Senate Finance Committee hauled in pharmaceutical executives from companies including Merck, Pfizer, and Sanofi.

Several of the executives endorse a bill (S. 340) meant to help generic producers create new, cheap medicines by making it easier to sue brand-name drugmakers in order to get samples of their products. Those samples are needed to navigate the drug approval pipeline.

The National Association of Chain Drug Stores had a Washington fly-in this week, bringing in pharmacy advocates from across the country.

Topping the list of issues they want to discuss with policymakers: The fees charged to pharmacies by insurers and drug industry middlemen and the Trump administration’s plans to halt them in some Medicare plans, said spokesman Chris Krese.

That group has also further strengthened its team of lobbyists recently, adding law and lobbying firm Olsson, Frank, Weeda, Terman & Matz to their roster. The firm specializes in regulatory work.