Speaker Nancy Pelosi opened a press conference this week by trying to focus on the Democrats’ legislative agenda, before taking questions about the House’s impeachment investigation. “Does anybody in this room care about the cost of prescription drugs?” she asked.

It demonstrated that even as they pursue their probe of President Donald Trump, Democrats, who won control of the House with 2018 campaign promises that included lower drug prices, want to deliver results to preserve their majority.

Aside from pushing drug price legislation (H.R. 3), they’re seeking to complete negotiations with the administration on the U.S-Mexico-Canada trade agreement, finish spending bills for 2020 and enact gun control legislation. The history of the last two Congresses that conducted impeachment proceedings shows those efforts to remove a president didn’t stop legislative action.

“You can still get legislation done,” said former Sen. Trent Lott (R-Miss.) who was majority leader when Clinton was impeached by the House and acquitted by the Senate in early 1999. Lott was also a member of the House Judiciary Committee when it approved articles of impeachment against President Richard Nixon. 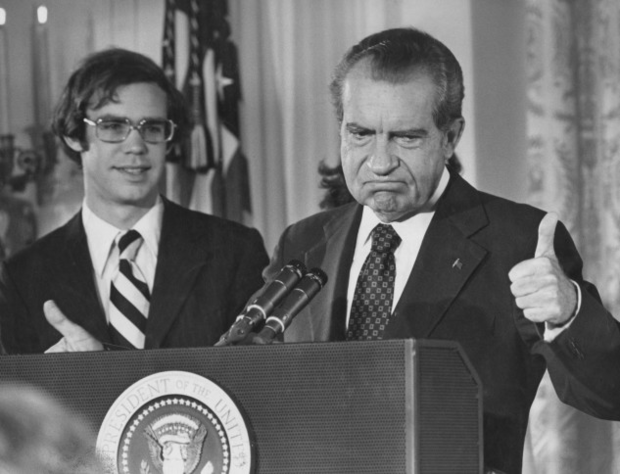 (Photo by Keystone/Hulton Archive/Getty Images)
President Richard Nixon addresses White House staff upon his resignation on Aug. 9, 1974.
His son-in-law David Eisenhower is with him.

Soon after his Senate acquittal, “Clinton called me and wanted to discuss some bill,” Lott said. “He never mentioned that we just had his impeachment trial and I had voted for the articles of impeachment. It was just as if that hadn’t happened. So we went forward.”

House Democrats argue that in the 116th Congress political gridlock, not impeachment, is the biggest impediment to legislating. Trump and other Republicans have complained the accelerated probe will paralyze Washington.

“I don’t think anything changes” because “it’s been difficult to get them to deal with us on anything we care about,” said Rules Committee Chairman Jim McGovern ( D-Mass.) .

Partisan rancor stemming from the House impeachment investigation of Clinton’s affair with White House intern Monica Lewinsky didn’t stall legislation before the House voted in December 1998 to impeach the president for lying under oath about the relationship.

Lawmakers completed the annual appropriations process before the November elections even after Independent Counsel Kenneth Starr gave the House the report of his investigation of Clinton’s affair that became the basis of impeachment articles. The $520 billion omnibus spending bill Congress passed in late October of that year included $1.2 billion to start Clinton’s multi-year initiative to lower the average class size in public schools by hiring 100,000 teachers.

“Bill Clinton was able to do two things at once, defend himself and govern the country, and that’s my advice to President Trump,’” said Sen. Lindsey Graham (R-S.C.), who as a member of the House served as an impeachment manager during the 1999 Senate trial of Clinton.

The 93rd Congress, which culminated in Nixon’s Aug. 9, 1974 resignation to avoid impeachment for covering up White House involvement in the Watergate break-in, recorded an astonishingly productive legislative record by today’s standards that included enactment of the Endangered Species Act and a trade bill.

That Congress created the Congressional Budget Office and the modern budget process, and established the Legal Services Corp. on July 25, 1974, just weeks before Nixon resigned.

Partisan gridlock that’s prevented the current Congress from doing little more than confirming presidential appointments and funding the government wasn’t a factor during the Congress that came close to impeaching Nixon.

Democrats one-sided control of House and Senate at the time “explains a whole lot of accomplishments” and bipartisanship, Ross Baker, a Rutgers University political scientist said in an email. “Nothing fosters bipartisanship better than a powerless opposition party.”

The current Congress reached agreement with Trump on spending levels for the 2020 and 2021 fiscal years to raise caps on discretionary expenditures (Public Law 116-37) but hasn’t passed any major legislation.

There are indications that the Congress and White House may move ahead on a few items.

Pelosi (D-Calif.) reported progress in negotiations with U.S. Trade Representative Robert Lighthizer to strengthen enforcement of labor and environmental standards in the trade agreement with Mexico and Canada. “We are on a path to yes,’’ she said at the Oct. 2 press conference.

McCarthy and Senate Majority Leader Mitch McConnell (R-Ky.) demanded action by the Democrat-controlled House on approving the trade deal in a Sept. 30 opinion piece in The Wall Street Journal.

Rep. Peter Welch(D-Vt.), a chief deputy majority whip, said the impeachment investigation won’t cause a government shutdown over spending, despite disagreements over Trump’s demand for money to build a barrier on the southern border. Republicans “have come to the conclusion it’s not in their interest to shut down government,’’ he said in an interview.

With assistance from Steven T. Dennis of Bloomberg News