Federal contract spending for immigration enforcement and processing surged nearly 40 percent over the past four fiscal years with two of the top earners being private prison companies that have faced multiple allegations of inhumane treatment of migrants.

Total spending in fiscal 2018 was $7.4 billion compared with $5.3 billion spent four years ago. CoreCivic Inc. and the GEO Group Inc., which provide detention services, migrant transportation, and other services, received boosts of $85 million and $121 million respectively over the four-year period, a Bloomberg Government analysis of contract data from the U.S. General Services Administration shows.

These private, for-profit prison companies and public jails and detention centers housed a record 48,000 undocumented adults and children in families as of Jan. 1, the latest date for which data is available, according to Immigration and Customs Enforcement. The analysis spotlights a system that has evaded congressional budgeting limits, watchdog groups and lawmakers say.

“There’s been a failing on the part of Congress to step back and realize the executive branch is no longer operating in good faith, and they’re inflating numbers and using false rationales,” said Heidi Altman, director of policy at the immigration advocacy group National Immigrant Justice Center.

“That’s jarring, and requires much more extreme oversight response than we’ve seen from Congress,” she said. 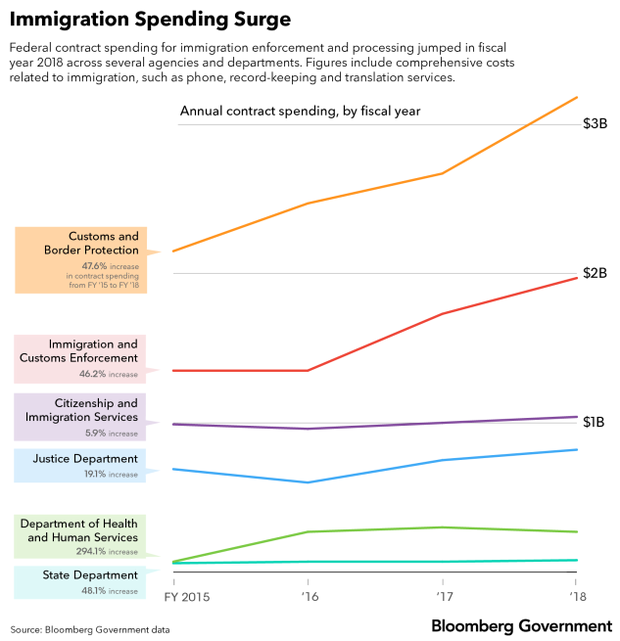 Meanwhile, President Donald Trump has requested billions more than Senate appropriations bills call for to pay for his immigration policies, including funds to build a long-promised border wall that Democrats oppose. The clash has led to a partial government shutdown, now in its fifth week.

Newly empowered House Democrats are promising more oversight of the system and Trump’s policies and operations that have led to the separation of undocumented families and the death of two minors in border patrol’s custody.

The Bloomberg Government data analysis includes contract obligations for immigration enforcement and processing-related agency operational costs, not just detention. The agencies looked at include U.S. Citizenship and Immigration Services, Customs and Border Protection, ICE, U.S. Marshals Service, Executive Office for Immigration Review, and portions of the Departments of State and Health and Human Services, including the Administration for Children and Families. It doesn’t include federal grants given by the Department of Health and Human Services to house unaccompanied minors.

Representatives from the immigration-related agencies and the Department of Homeland Security didn’t respond to or declined requests for comment, citing reduced staffs during the government shutdown.

The number of adults and families in detention as of Jan. 1 has risen 40 percent from fiscal 2016’s average population rate, Altman said in an interview. 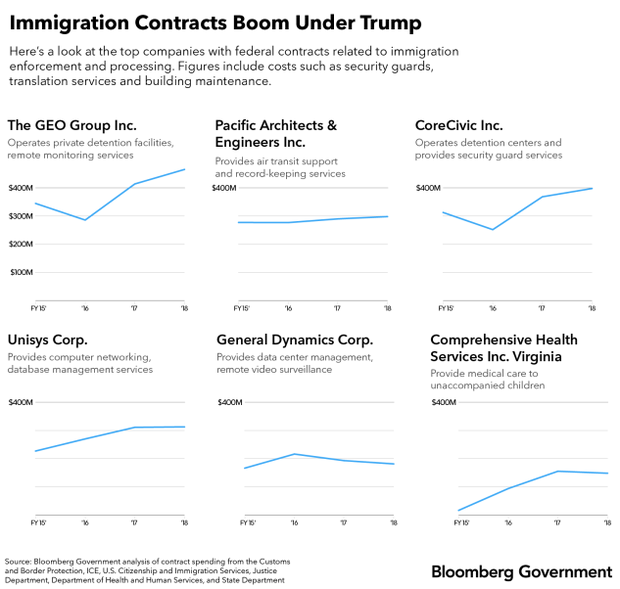 By comparison, the average daily population for ICE detainees was about 19,500 in 2000, the same year apprehension of undocumented immigrants reached 1.68 million nationwide, second only to 1.69 million in 1986, according to data from the Congressional Research Service and the Border Patrol. For the first 10 months of fiscal year 2018, the latest period data is available, the Border Patrol caught about 362,000 undocumented migrants.

Altman pointed to CoreCivic and GEO Group as examples of how the spending is, she says, in part being driven by private prison companies with a profit motive and incentives to cut corners.

Both companies have faced DHS Inspector General reports for allegedly mistreating migrant detainees and not complying with multiple health and safety standards. And both companies are facing a series of lawsuits alleging they are violating minimum wage laws by paying immigrant detainees to work for $1 a day, or even less in a case against CoreCivic, formerly known as Corrections Corporation of America.

A representative from CoreCivic said the company’s work programs were completely voluntary and complied with ICE standards, including federally established rates for detainee labor. The safety issues identified in the inspector general report from December 2017 were quickly and effectively remedied, he said.

A GEO Group spokeswoman said the lawsuits were meritless. The company had remedied issues flagged in the watchdog report and felt other findings lacked context, she said.

“The wage rates associated with this federally-mandated program are stipulated under long-established guidelines set by the United States Congress,” the spokeswoman said in an email.

The GEO Group spokesman pointed to the opening of the Montgomery ICE Processing Facility in 2018 as one reason for the increase in contract spending, adding that planning and design of the center began during the Obama administration.

Lawmakers and government watchdog groups have already begun to scrutinize the spending, especially with ICE.

“These companies see what we appropriate, they see what happens and then they adjust their prices accordingly, and I think it’s our job to make sure we’re not frittering away taxpayer dollars,” Tester (Mont.) said in an interview.

“It is clear that ICE does not view as binding the funding levels provided in law,” the report said.

Part of the reason ICE has underestimated costs in its congressional budget requests lies in errors in the way the agency calculates its detention costs, such as double counting some costs and not properly adjusting for inflation, according to an April report from the Government Accountability Office.

“In recent years, ICE has consistently had to reprogram and transfer millions of dollars into, out of, and within its account used to fund its detention system,” the report said.

The DHS has yet to put in place recommendations given in the report, Rebecca Gambler, director of homeland security and justice at the GAO, said in an interview.

To be sure, contract spending on immigration enforcement and processing was on the rise during past administrations as well.

Homeland Security Secretary Kirstjen Nielsen has said more detention beds are needed because keeping migrants detained while they await court proceedings to see if they can stay in the U.S. ensures faster processing and lower risk they’ll remain illegally.

“The key is to apprehend those who do not have a legal right to stay, be able to detain them, to keep them in a process with the courts that is very expedited,” Nielsen said at a November Council on Foreign Relations event in Washington, according to a transcript.

Nielsen also said the increased detention is needed to deal with the number of border apprehensions, which have increased since Trump took office, especially the number of individuals traveling as families, which rose seven-fold between 2013 and 2018, according to DHS data.

Trump’s request for more funds may be justified to handle the growth in apprehensions, Capito said in an interview.

“I’m less worried about whether what he’s asking for is too much and would be more subject to misuse than are we meeting the demands that we have presently. That, I think, is the big question,” she said.

Still, immigration advocates like Sharita Gruberg, an associate director at the Center for American Progress, say cheaper, effective alternatives to detention have been used by DHS in the past, and should be used again to backstop the ballooning spending.

“This happens a lot with ICE,” Gruberg said in an interview. “They detain first and then they go to Congress and pressure Congress to allocate more funds for bed space.”

To contact the editors responsible for this story: John Dunbar at jdunbar@bloomberglaw.com; Paul Hendrie at phendrie@bgov.com; Robin Meszoly at rmeszoly@bgov.com