The General Services Administration announced Aug. 19 that it will accept revised proposals for a 10-year, $15 billion, small business contract known as Alliant Small Business 2, or A2SB.

The move to reassess bids comes after the agency had announced awards to 81 companies in March after bids were submitted in October 2016.

The do-over is the result of a decision by the U.S. Court of Federal Claims. The agency improperly credited bids for having acceptable cost accounting systems and failed to evaluate bid prices in a consistent manner, the court said.

A2SB is the focus of this week’s Bloomberg Government’s Top 20 Opportunities this week.

The predecessor to A2SB, Alliant Small Business (ASB), has generated $8.4 billion for about 70 companies since fiscal 2009. 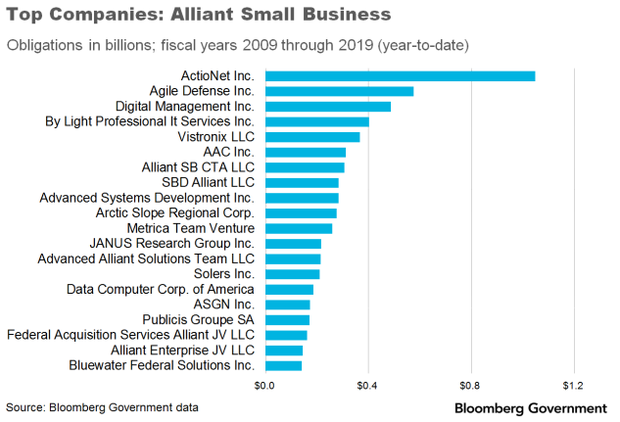 The top funding agencies include the Departments of Defense ($3.8 billion in ASB spending), Energy ($1.4 billion), and State ($647 million).

The most significant change in the new evaluation process is GSA’s decision to boost the number of estimated awards to 120 from 80 issued in March. The evaluation process will maintain the self-score criteria. Awards are planned to go to the 120 highest technically rated offers with fair and reasonable prices. A tie at the 120th rank would force GSA to make more than 120 awards. The boost in award will likely benefit some incumbents. Only seven incumbents from ASB were among the 81 award recipients that also won a slot on A2SB when announced in February 2018.

The Aug. 19 amendment also removes a portion of the proposal, Vol. 7, for financial responsibility documents by each member of a joint venture. The revised proposal submissions will now have six volumes.

A deadline for revised offers hasn’t been established yet, and a date for a pre-proposal conference hosted by the government hasn’t been set. Only companies that submitted bids in 2016 will be eligible for the upcoming awards.

The ASB ordering period expired on Feb. 2, 2019, according to GSA’s website, but spending obligations continue to flow through the vehicle for orders placed before that date.

Companies interested in competing for orders can use BGOV to determine which recompetes are likely to flow to A2SB.

According to BGOV data, a total of 58 ASB orders totaling $2.3 billion expired between Feb. 1, 2019, through Sept. 30, 2019, and could be competed on different multiple-award contracts such as GSA’s 8a STARS II, GSA’s VETS 2, or the Health and Human Services Department’s CIO-SP3 SB.

A remaining 215 orders totaling $2.8 billion are set to expire after Oct. 1, 2019, and have a higher likelihood of being competed on A2SB.

To contact the editor responsible for this story: Jodie Morris at jmorris@bgov.com