The drone industry is gearing up for a December release of a proposed rule that would create a virtual license plate framework for drones, after the Federal Aviation Administration delayed releasing the proposed regulation several times previously.

The FAA has said it aims to release a proposed remote identification rule for drones before the end of 2019. Remote identification refers to the ability of drones to display a virtual license plate, making them identifiable in-flight to law enforcement, airports, and the FAA. Companies such as Wing LLC, an offshoot of Alphabet Inc.’s Google, drone manufacturer SZ DJI Technology Co. Ltd., and Apple Inc. have met with regulators about the proposed rule.

If the FAA does finally release a proposed remote ID rule in December, after delaying its release at least three times before, it would eventually help law enforcement and airports identify whether a drone is a security threat. It will also serve as a stepping stone for other drone regulations. The FAA, with some exceptions, currently doesn’t allow drones to fly at night, over people, or outside an operator’s visual line of sight. The FAA said it won’t issue a rule on flying drones at night or over people until it publishes a remote ID rule. 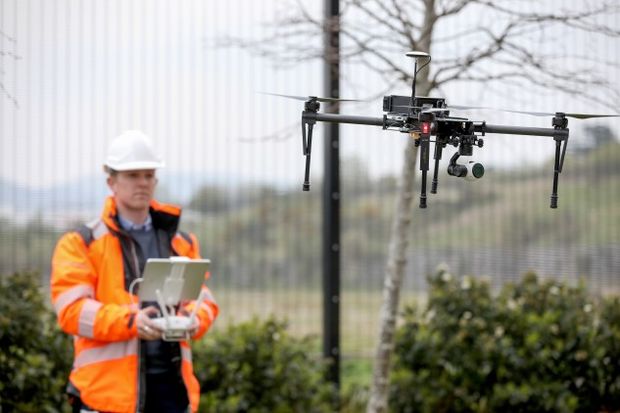 Paul Faith/Bloomberg
A drone operator demonstrates a DJI Matrice 100 drone at a conference in Belfast, Northern Ireland, on April 15, 2019.

“The commercial drone industry has been held back because of national security concerns around the use of drones,” said Lisa Ellman, executive director of the Commercial Drone Alliance, a lobbying group that represents drone makers and business users. “The rules are incredibly strict and very limited, and that is because there’s no remote ID requirement in place.”

The proposed rule has been under consideration by the White House’s Office of Information and Regulatory Affairs since Sept. 12. All regulations must be approved by OIRA before they’re published. It’s also OIRA’s job to coordinate the proposed rule’s content with other government agencies.

That’s important for the remote ID rule because there are so many agencies likely interested in it, including the Department of Homeland Security, FBI, Department of Defense, and Department of Justice.

OIRA has held at least 14 meetings since Sept. 12 with groups of people interested in the rulemaking, according to the fall regulatory agenda. The proposed rule is also listed in the regulatory agenda as economically significant, meaning that OIRA has determined it will have an annual economic impact of at least $100 million.

Two drone industry lobbyists said they expect the proposed rule to address the type of remote ID technology the FAA will accept. The agency could choose a WiFi-based option, called “local broadcast,” a cellular-based one referred to as a “networked solution,” or both.

A local broadcast option would require drones emit a location signal over WiFi, while a networked solution would mandate drones declare their location over a cellular connection. A networked solution would allow any authorized receiver to determine where a drone is flying. Recreational drone users staunchly oppose any regulation requiring each drone to have its own transponder, said Tyler Dobbs, director of government affairs at Academy of Model Aeronautics.

A remote ID standard developed by ASTM International, a global standards development organization, may also offer a clue as to the FAA’s path. The organization is currently developing a remote ID standard, said Dan Bergels, public relations manager for ASTM International. The group won’t share details about the content of its standard until its publication date, which has not been set yet.

An ASTM standard would examine the technical aspects of a remote ID rule, such as whether a drone’s location could be accessible by smart phone, said Brendan Schulman, DJI’s vice president of policy and legal affairs. It would still be up to a regulator, such as the FAA, to determine what to do with that technical information as it develops its own rule.

“A whole lot more can be done with the drones, but to have those approvals means that we have to have an approach to remote ID in place,” said Doug Johnson, vice president of technology policy at the Consumer Technology Association, a group that lobbies on drones.