The 2020 elections will measure to what degree the Republican brand has crumbled in what was once the party’s bedrock — suburbia.

With an impeachment vote adding a new wrinkle this week, House Democrats will both be defending newly won territory and pushing to see how much further into America’s bedroom communities the party can take advantage of a political realignment illustrated by a drumbeat of recent electoral evidence.

The test will stretch from Long Island, N.Y., where longtime Rep. Peter King is retiring and fellow Republican Lee Zeldin faces a competitive re-election, to Orange County, Calif., which in 2016 a Democratic presidential nominee won for the first time in 80 years and in 2018 all of its Republican-held House seats went blue. The pattern continued in 2019, in a narrow GOP congressional special election victory in North Carolina in August and then last month in state races in Kentucky and Virginia.

“Majorities are built in suburbs, and Republican support has severely suffered in suburbia since Trump’s election,” said Alex Conant, a Republican strategist. “Any Republican member who represents a suburban district has either lost or is facing a really tough election every two years.” 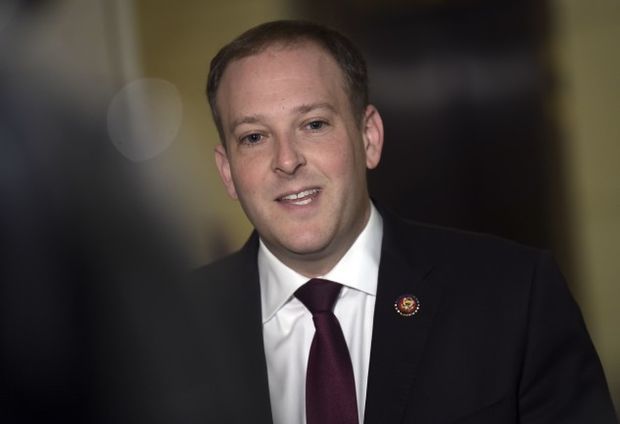 (Photo by Eric Baradat/AFP via Getty Images)
Rep. Lee Zeldin, a Republican who represents the eastern part of Long Island

But even as Republican insiders warn of the potential for more difficult races, some incumbents are staking their careers on the expectation that the turnout boost that accompanies Trump’s re-election campaign provides an advantage absent in last year’s midterms.

King is one of a few Republicans in competitive, suburban districts who have announced they won’t run again in 2020, including Reps. Rob Woodall (R-Ga.) and Kenny Marchant (R-Texas). A total of 20 House Republicans have said they won’t seek re-election or run for another public office next year. GOP strategists are watching for more.

Many of the vulnerable Republicans who held on last year did so by slim margins. Marchant won his race by 3.1 percentage points after years of comfortable double-digit wins. Woodall had a similar result in his district outside Atlanta.

Filing deadlines will have passed in only seven states by the end of this week, so there is still time for more to opt against running again. Rep. John Carter (R-Texas), who has represented the Austin suburbs since 2003 and faced a strong challenger last year, filed to run ahead of the Dec. 9 deadline. Rep. Fred Upton (R-Mich.), who was re-elected by 4 points, has until April to decide.

Blue in the ‘Burbs

What was for the past two decades a gradual shift away from the Republican Party in major metropolitan areas sped up considerably after Trump’s election. The movement led directly to the Democratic takeover of the House, which relied on picking up suburb-based Republican strongholds across the country.

Most of the House seats Democrats picked up last year came in districts based in the inner and outer suburban rings of cities, according to an analysis by FiveThirtyEight of a report by CityLab, a website focused on urban design. Bloomberg LP plans to acquire CityLab.

The report categorized the House’s 435 districts into six groups based on geographic density, with the two where Democrats made gains in the middle of the density spectrum. Seats in those two categories, dubbed by CityLab as Sparse Suburban and Dense Suburban, account for more than half of House Democrats’ target list for 2020.

“It’s obviously an area where there is an intense focus because it’s really the battleground,” said Rep. Michael McCaul (R-Texas), whose district touches the suburbs of both Austin and Houston. “Both sides of the aisle are going to be focusing time and attention on the suburban vote.”

The term “suburbs” can apply to a range of areas, but the ones that have seen the most drastic shift away from the Republican Party are those closest to major cities, where increased support for Democrats has been more than a decade in the making, said Lawrence Levy, executive dean of the National Center for Suburban Studies at Hofstra University. Initially, the change was due in part to the suburbs becoming more racially diverse, but Trump’s election quickened the transformation.

“There’s a preponderance of moderate, middle-of-the-road, unaligned independent voters who swing back and forth, and those voters tend to recoil from extremism of any stripe,” he said. “What they’ve seen out of Washington does not align with their values.”

Democrats’ 2018 successes included areas around the biggest cities in some of the reddest states, including Salt Lake City, Oklahoma City and Charleston, S.C. The Democratic freshmen now holding those seats are among the party’s most vulnerable, given those districts’ past support for Trump.

Republican lawmakers chalked up losses in 2018 and 2019 to Democratic voters expressing their frustration with the Trump administration and the tendency of the party in the White House to lose seats in the House.

“For me 2020 will be easier than 2018,” said Fitzpatrick, whose Philadelphia-area district saw Democrats win several county-level races last month. “Turnout won’t be an issue, everyone will come out to vote in 2020, and I do well with center-voters because I myself am a centrist.”

Others are hoping impeachment ends up a political positive for the GOP in the suburbs.

“I feel confident that once the American people are aware of all the facts about this impeachment and the unfairness of the way the Democrats have handled the process, I think there’s a pretty good chance we’ll see the reversal in this election cycle,” Rep. Steve Chabot (R-Ohio) said.

Republicans said they could also receive a boost if Democrats nominate one of the more progressive candidates in the presidential field. Rep. Tom Cole (R-Okla.), who previously chaired the National Republican Congressional Committee, said the Democratic nominee would be the “single biggest variable in the next election.” The NRCC already is gearing up to portray the entire Democratic Party as supportive of policies including Medicare-for-All and the Green New Deal.

Few experts predict the GOP will take back the House in 2020, and it got a couple of seats harder recently after a court ordered North Carolina to redraw its district lines. But if Republicans want the majority again, they need to find a way to persuade suburban voters not to abandon the party, said Matt Mackowiak, a Republican strategist based in Texas.

“We’re not going to get the majority back without suburbs — there’s just no question about it mathematically,” he said. “The suburbs are the battleground.”