The Education Department could cancel all U.S. student debt itself—and without any action by Congress—according to an analysis released Monday by the left-leaning Roosevelt Institute.

The report argues that the Higher Education Act (Public Law 110-315) already gives the education secretary discretion to “compromise, waive, or release” any claims against student borrowers.

“It’s a way to put another option on the table given the possibility that there wouldn’t be a congressional majority in support of debt cancellation,” said Luke Herrine, the author of the report and a doctoral student at Yale Law School. 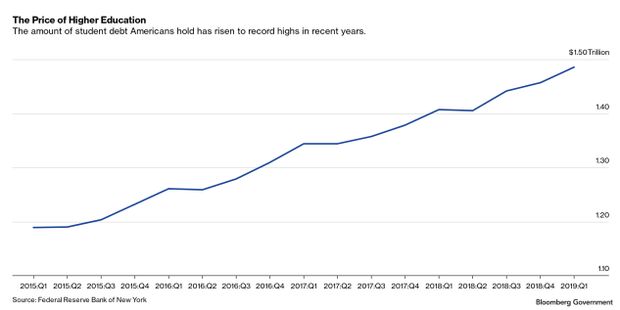 Herrine was previously the legal director for the Debt Collective, an activist group that advocated for loan forgiveness for students who attended the for-profit Corinthian Colleges chain, which shut down in 2015 after numerous investigations by state and federal law enforcement.

Outstanding student loan debt has climbed to $1.5 trillion in the U.S. Democratic presidential candidates including Sen. Elizabeth Warren (D-Mass.) and Sen. Bernie Sanders (I-Vt.) have proposed plans to cancel most or all federal student debt, arguing it holds back economic opportunities for borrowers who took out loans to attend college.

The debt cancelation plans aren’t likely to get much traction in Congress though, even among fellow Democrats. And the reality of Washington gridlock has led some progressive advocates to make novel arguments that a president should use executive authority to carry out major liberal priorities, including debt cancellation.

However, no presidential candidate has endorsed using executive authority to pursue debt cancellation so far.

Mark Huelsman, associate director of policy and research at the left-leaning think tank Demos, said calls to use executive action on policies like student loans are a function of gridlock and divided government.

“It’s driven by the fact that there are big, bold progressive ideas on the table both within higher education and without that even under somewhat rosy congressional scenarios are going to be a heavy lift to pass,” he said.

Under the Obama administration, the Education Department promulgated regulations in 2016 spelling out how borrowers could seek loan forgiveness when they are defrauded or misled by their college, a process known as borrower defense to repayment. The bar for debt forgiveness was raised, though, by new regulations issued by Education Secretary Betsy DeVos this year. The Education Department has granted more than $534 million in debt relief through borrower defense claims since Corinthian’s collapse.