Education Secretary Betsy DeVos agreed to release documents relating to her policies on loan relief for defrauded college students late Thursday, hours ahead of a planned subpoena by House Democrats.

House Education and Labor Chairman Bobby Scott (D-Va.) had been seeking records on the Trump administration’s decision-making on loan relief for months without satisfactory responses from the Education Department.

Democrats are looking to find out why the Education Department has stopped approving loan relief claims from tens of thousands of students who attended for-profit college chains. Student borrowers are waiting for resolution of more than 200,000 “borrower defense” claims still pending at the department. 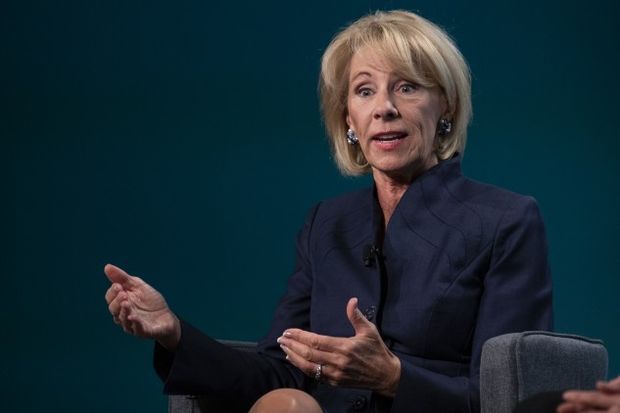 In recent weeks, Scott has pressed DeVos herself to testify about handling of the claims. The department declined to make DeVos available, offering other Trump administration officials in her place, and questioning the committee’s authority to compel testimony.

“For the past year, we have been asking the Department to explain why they are refusing to provide debt relief to more than 210,000 defrauded borrowers. Late tonight, the Department finally agreed to provide the documents we have requested,” Scott said in a statement Thursday.

He said his committee would closely review the documents to ensure they are responsive to his questions. He added he looked forward “to discussing this information at a hearing with the Secretary in the near future.”

Borrower defense to repayment, a little noticed provision of federal law before 2015, allows borrowers to seek cancellation of their federal loans if they were misled or defrauded by their colleges. Tens of thousands of students who attended large for-profit college chains Corinthian and ITT Tech filed claims after the colleges collapsed.

The Trump administration has essentially stopped issuing new approvals for loan relief since a federal judge in California blocked a 2017 Trump administration formula that would award only partial loan forgiveness to student borrowers it deemed to have legitimate borrower defense claims. After a federal judge in California ruled the partial relief standard was illegal last year, the Education Department appealed to the Ninth Circuit.

After DeVos last week rejected another request to testify in person, it appeared likely that a subpoena would soon follow. The Education Department offered to make Mark Brown, the chief operating officer of the Office of Federal Student Aid, available in place of DeVos. Scott rejected the offer in a Nov. 6 letter, saying Brown, who joined the department earlier this year, was not an appropriate witness because “he was not privy to the conversations laying the foundation of the Department’s posture regarding Borrower Defense.”

Democrats and Education Department officials have continued a back-and-forth over the last week on official testimony. Scott said he would agree to a transcribed interview with Brown followed by testimony from DeVos—an offer the department rejected.

In an email to reporters Thursday, a department spokeswoman said multiple attempts were made to accommodate requests from Scott to produce information

“Any of our proposals would get the Committee the information they’re seeking—the only thing it wouldn’t give Democrats is a show trial with the media circus to match,” Education Department spokeswoman Angela Morabito wrote.

House Democrats have stepped up oversight efforts targeting the Education Department just after DeVos was held in contempt by a federal judge in California. The federal judge who blocked her partial relief standard ruled last month that the department had improperly collected on the loans of thousands of students with pending borrower defense claims. The department is facing a $100,000 fine attached to the contempt order.