Rep. Jeff Van Drew‘s opposition to the impeachment inquiry makes him an outlier among House Democrats.

But back in his South Jersey district, his stance aligns with many constituents of both parties.

“He’s letting the facts present themselves and not getting out over his skis,” said Brendan Sciarra, the chairman of the Cape May County Democratic Party.

“Yes there’s a primary but there also is a general, so it’s important to appeal to all the voters,” said Sciarra, who is the owner of Mudhen Brewing Co. a craft brewery in the shore resort of Wildwood.

Van Drew (D-N.J.) is one of 44 House Democrats identified as vulnerable in the 2020 election. Trump carried his district by about 5 percentage points in 2016, though Van Drew won the seat in the 2nd District in 2018 with just under 53 percentage points. Van Drew succeeded Republican Rep. Frank LoBiondo, who retired after 24 years in the House. 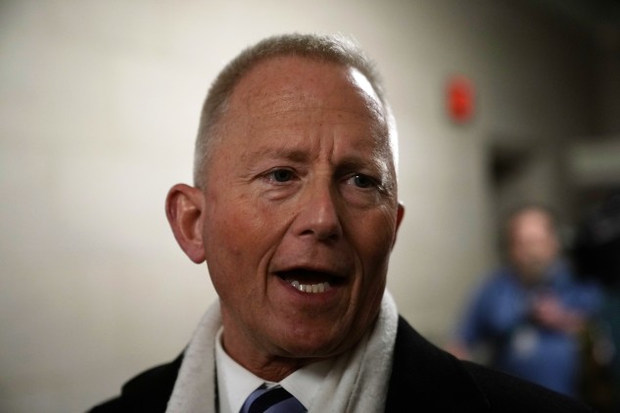 Most Democrats in competitive districts refrained from supporting impeachment until mid-September when it was revealed Trump asked the president of Ukraine to investigate former Vice President Joe Biden and his son Hunter.

Since then, all but a handful have publicly come out in support of the impeachment inquiry. Van Drew is one off the holdouts, saying Trump’s actions, much like Bill Clinton’s don’t meet the standard of “high crimes and misdemeanors.”

“What we’re going to start pretty soon is every other term we’re going to have an impeachment because we don’t like a president,” Van Drew said in an interview.

`Get Your Crap Together’

The moderate makeup of Van Drew’s district is reflected in Carol Ardle, a registered Democrat who said she votes for candidates of both parties. To her, the impeachment inquiry is a waste of time.

“Nothing has gotten done because the Democrats are just worried about taking Trump down,” she said on a recent Saturday morning at the Key West Cafe, a small diner in Wildwood, several blocks away from the boardwalk. “Get your crap together, run the country, represent the people.”

Jackie Mikulski, who owns the diner with her husband, is also a registered Democrat who supports members of both parties. Congress, she said, no longer represents middle America. Lawmakers are wealthy and out of touch, consumed by political games.

But not Van Drew.

“Time and time again he has done exactly what he says he’s will do,” she said. “If you come to him, he will help you whether you’re a Republican, Democrat, anything.”

Not all voters are happy Van Drew doesn’t support the impeachment inquiry, said Barbara Wilson, another member of the Cape May Democratic Party. Yet she suspects he will get their votes again in 2020.

“When push comes to shove, they won’t vote for a Republican so they end up voting for him or not voting,” she said.

Van Drew has heard from constituents who want him to support impeachment — he said one woman told him he needed “to find real hate in your heart” for Trump. But most folks he’s spoken with are asking him about veterans benefits for family members or bringing solar panels to their neighborhood.

“Most of the people say ‘I kinda of agree with you, leave it alone for now,’” he said.

While Van Drew is holding off on his support for the impeachment inquiry, other moderate Democrats who have publicly come out in favor of it have become targets of the National Republican Congressional Committee. The Republican National Committee and Trump’s re-election campaign have also organized protests in these swing districts.

Van Drew isn’t immune from attacks from the right. While Republicans in the district are happy he hasn’t backed the inquiry, he still has voted with his party a majority of the time, said Jacci Vigilante, chairwoman of the Gloucester County Republican Party.

Vigilante said she expects all Democrats running for re-election in 2020 to be hurt by their party’s decision to move forward with the impeachment inquiry. “Whether they vocally supported it, supported in the background or didn’t support it at all, I think the backlash is going to affect them,” she said.

In response to such criticism, the Democratic Congressional Campaign Committee released a memo last week highlighting the support for the impeachment inquiry. Even in competitive districts, Democrats have a lead of three points, according to the DCCC’s polling.

The memo includes talking points for vulnerable Democrats, focusing on no one being above the law. It also instructs members to focus on other legislative priorities — a strategy that seems to be working for Van Drew.

“You understand when you pick up the phone and call Jeff, he’s there,” Sciarra said. “This whole impeachment issue can dwarf and muddle the waters on all the good stuff that he’s done.”