The Federal Election Commission’s paralysis on key campaign-finance matters could be extended indefinitely as leaders in Congress skirmish over how to appoint new commissioners.

Senate Republicans, led by Majority Leader Mitch McConnell (R-Ky.), want to install six new commissioners. The move would fill vacancies and replace current commissioners, including Ellen Weintraub, the FEC’s Democratic chairwoman, who has frequently criticized President Donald Trump. A clean slate of members will go a long way toward fixing some of the perceived dysfunction at the commission, said a Senate Republican aide, who asked not to be named.

Democrats, meanwhile, say the Senate should move quickly to fill existing vacancies, restoring a quorum and allowing the commission to function fully. Democrats aren’t calling for immediate replacement of the current commissioners.

The standoff could delay for weeks or months restoring the FEC’s ability to enforce campaign-finance laws as the 2020 election approaches. Federal campaign spending is projected to approach $8 billion to $10 billion. The departure of Republican commissioner Matthew Petersen on Aug. 31 reduced the FEC to three commissioners with three seats vacant. At least four are needed to approve regulations, advisory opinions and enforcement actions. 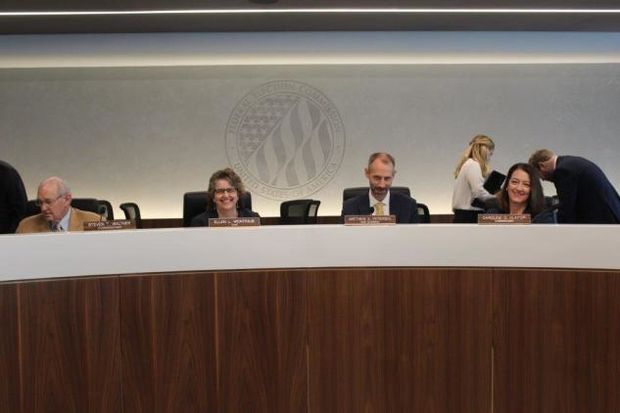 Weintraub said the decision about how to proceed is for others to make, though she hopes a commission quorum is restored as soon as possible. “I will continue to do the job to the best of my ability as long as I am in the job,” she added.

A candidate to fill the single Democratic vacancy on the commission has been recommended by Democratic Senate leaders but not yet approved for nomination by Trump, Sen. Amy Klobuchar (D-Minn.) said in an Aug. 31 letter to the president. The letter didn’t name the prospective new commissioner, but Klobuchar asked Trump to “swiftly complete the vetting process on the Democratic candidate for the Commission and put forward a nominee so that the Senate can move forward with the confirmation process.”

Klobuchar is a Democratic presidential candidate and the ranking member on the Senate Rules and Administration Committee, which has jurisdiction over the FEC. “A fully functioning FEC is critical to safeguarding our political system from corruption and foreign influence,” she said in the letter to Trump. “The Rules Committee is ready to act quickly restore a quorum to the FEC.”

In addition to the Democrat’s FEC candidate, there is a pending Trump nominee for a Republican seat on the FEC. Texas election lawyer James Trainor was first nominated in 2017, but no action has been taken in the Senate to confirm him. In the past, FEC nominees have been approved in bipartisan pairs.

Petersen’s departure left Weintraub serving on the commission, along with Steven Walther, an independent holding a Democratic seat, and Republican Caroline Hunter. Weintraub’s term expired in 2007, Walther’s in 2009, and Hunter’s in 2013. The law that created the FEC, however, allows commissioners to remain indefinitely until replaced.

Even before Petersen left, the FEC was unable to reach consensus on key issues. The commissioners divided along party lines on questions such as disclosure of sources of campaign spending and coordination between candidates and supposedly independent outside spending groups, which have poured hundreds of millions of dollars into recent elections.

Weintraub said the commission will continue its most visible task of collecting and making public campaign finance disclosure reports, even if it doesn’t have a quorum to perform its other functions. The FEC “will continue to shine a bright spotlight on federal campaign finance,” she said in a memo Tuesday to FEC staff.

Weintraub has been criticized by Republicans for her increasingly outspoken role at the FEC, including televised appearances responding to Trump’s comments minimizing foreign election interference and emphasizing threats of voter fraud.

Rep. Rodney Davis (R-Ill.) sent a letter to Weintraub and other FEC commissioners last month that included thinly veiled criticism of the Democratic chairwoman. Davis is the top Republican on the House Administration Committee, which has jurisdiction over campaign finance and FEC matters. He warned that “partisan attacks only serve to undermine your work.”

“Weintraub ought to go,” said Brad Smith, who held a Republican seat on the FEC until 2005. Smith now heads the nonprofit Institute for Free Speech, which frequently challenges campaign finance regulations. He said in a phone interview that Weintraub should be replaced because her frequent public comments have raised doubts about her objectivity and confused the public about the narrow role of the FEC in regulating elections.

Adav Noti, a former FEC staff attorney now with the nonprofit Campaign Legal Center said in a phone interview that public pressure to deal with commission’s long-standing problems is increasing because the FEC has lost its quorum and is unable even theoretically to enforce campaign finance laws going into the 2020 election.

The country needs a debate over the role of the FEC, Noti said, adding that “the current situation provides an opportunity to have that debate.” He said the commission could be revamped by appointing six new commissioners, “ideally commissioners who believe in the mission” of the FEC. It is “absolutely” realistic to expect the administration and the Senate to act, Noti added, even though the FEC has often been ignored in the past.

“In ordinary times, we’d call on the president and the U.S. Senate to immediately fill the vacant FEC positions to prepare for the expected $8 billion in political spending in the 2020 elections,” Holman said. “But who are we kidding? We already know they won’t.”

To contact the editors responsible for this story: Adam Schank at aschank@bgov.com; Robin Meszoly at rmeszoly@bgov.com