The number of migrants apprehended at the U.S.-Mexico border in fiscal 2019 has already surpassed the last two years’ totals combined and is on pace to likely be the highest annual number in 12 years.

The final numbers for fiscal 2019, which ends Sept. 30, will cap a year of political turmoil sparked by a historic surge of families and children crossing the Southwest border and the Trump administration’s series of often unorthodox policies to stop it—many of which sparked deep public outcry.

Through August, 811,016 undocumented migrants have been captured at the Southwest border this fiscal year, according to U.S. Customs and Border Protection data. That figure is more than double last year’s apprehension total of 396,579 and more than the last two fiscal years combined. Final 2019 numbers are slated to be released in early October.

The 2019 figures appear likely to surpass 2007’s apprehensions, which totaled 858,638. Each month in fiscal 2019 has seen an increase compared to the same month in the prior year and 2018’s September figure was 41,486. The annual record for border Southwest crossing captures was set in 2000, the first year region-specific data was compiled, with more than 1.6 million.

Border security is a top political priority of President Donald Trump, who has frequently used apprehension totals to gauge his success and make personnel decisions. Yet despite fallout from the border battle—including the the country’s longest government shutdown, a purge of top officials at the Department of Homeland Security, billions of emergency federal dollars granted for border operations, and billions more diverted from military projects to build a border wall—the final total of apprehensions still appears on track with government estimates made earlier in the year before monthly crossings peaked. 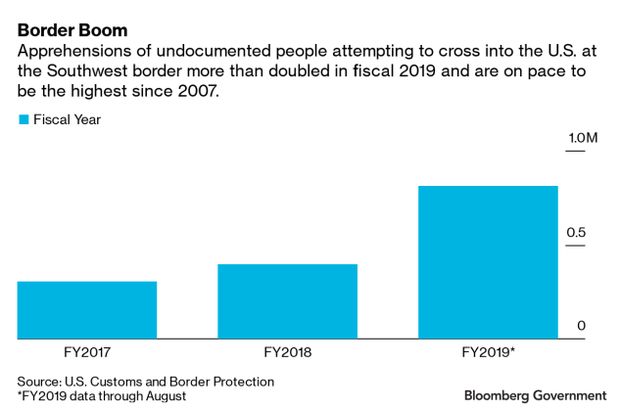 Spokespeople from DHS and the U.S. Customs and Border Protection did not respond to requests for comment. Officials have, however, pointed to a slowing in recent months’ crossings as evidence their policies are working.

Recent policy wins by the administration, including legal decisions allowing wall construction to move forward, and on eligibility for asylum seekers, will help, but their impact won’t be significantly seen until next year, Jessica Vaughan, director of policy studies at the Center for Immigration Studies, which favors limiting immigration, said in an email.

Still, Vaughan called the apprehension numbers “disastrous” and in part blamed the performance of DHS’ acting Secretary Kevin McAleenan, whom she said has slow walked policy changes while hoping Congress would act.

Other DHS officials and Republicans point the finger at Congress for the continued crossings and say legislative action is needed to curb it next year.

“We still have the same attraction because we haven’t changed our laws to stop enticing people up here,” House Homeland Security Committee ranking member Mike Rogers (R-Ala.) said in an interview.

But Democrats and immigration advocates say migrant flows will continue to be high as long as the Trump administration doesn’t address what they call the “root causes” spurring it—few jobs, high violence, and networks of human traffickers in El Salvador, Guatemala, and Honduras. They also say the Trump administration’s asylum policies have made it virtually impossible for even those with legitimate claims to win protections in the U.S.

“The administration has refused to get to the root causes,” Sen. Richard Durbin (D-Ill.) said in an interview. “If it doesn’t deal with these three countries and the problems that they face, these people in desperation will risk their lives to come to the United States.”