Credit unions want none of it. Any benefits given to the banks, they argue, would ultimately open up the floodgates for such giants as Wells Fargo & Co. and Bank of America Corp. to harvest business from troops and their families.

The battle is being joined over a provision in the Senate’s 2020 defense authorization measure (S. 1790) that would require the Defense Department to treat credit unions and banks equally when deciding whether to waive or charge rent for doing business on military bases. Because they are not-for-profit, tax-exempt organizations, credit unions generally don’t have to pay that rent. 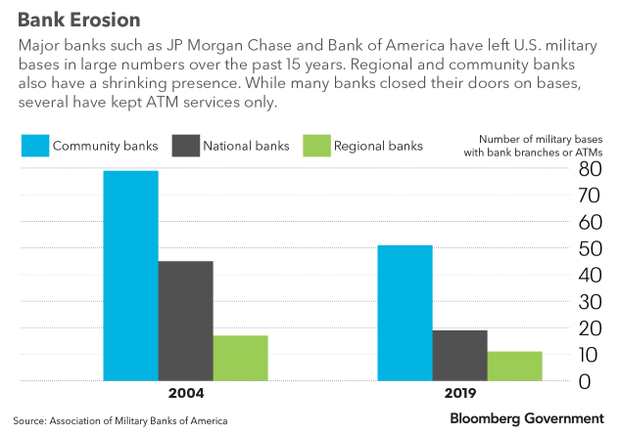 Even though credit unions are seasoned at fighting to keep the status quo, this year may be different. Jim Inhofe, a champion of community banks, is the chairman of the Senate Armed Services Committee. The current system “is forcing people to use one type of institution over another, there is no reason for it,” Inhofe (R-Okla.) said in an interview. “I have been in the military and I know that if you go in and you don’t have that much to be your choice, what is accomplished by that?”

Inhofe’s “chairman’s mark,” the underlying legislative proposal for the defense bill, this year included the banking provision, compared to previous years when lawmakers offered amendments during the bill’s consideration in the House or the Senate. The House version, (H.R. 2500), omits such language. Every year, the provision aimed at helping banks has been stripped from the final version sent to the president’s desk. Credit unions want to ensure this year’s legislation sticks to that pattern.

Some large banks have been accused of treating troops shabbily in recent years. The biggest U.S. banks, including JPMorgan Chase & Co., Wells Fargo, and Bank of America discovered that they wrongfully foreclosed on more than 700 military members during the housing crisis in 2009, while Wells Fargo forced members of the military to buy unwanted car insurance which led to wrongful repossessions of vehicles, according to the New York Times.

The Defense Department can waive the cost for credit union land leases as well as administrative and logistical fees through an amendment to the Federal Credit Union Act in 1996. This exemption, though, isn’t guaranteed for every credit union on every military base, according to a letter the association sent to the leaders of the Senate and House Armed Services panels, who are negotiating the final defense authorization bill.

Credit unions argue that leasing is negotiated between a military installation’s base commander and a specific credit union. Credit unions may qualify for a rent exemption if at least 95% of the membership being served in the space are military personnel or federal employees, or members of their families.

CUNA President and CEO Jim Nussle, formerly a Republican House member and Office of Management and Budget director, has rallied the association’s members. In September alone, six credit union leagues representing 14 states and more than 75 credit unions went to Capitol Hill in an effort to urge lawmakers to remove the Senate provision.

No to Wells Fargo

If the language “isn’t removed from the bill, banks like Wells Fargo and Bank of America will have easier access to set up shop on bases around the world,” Nussle said in his September call for action. “We have seen how these banks have treated their customers over the years. There is no reason to make it easier for them to engage our servicemen and women.”

Senate Armed Services Committee member Richard Blumenthal (D-Conn.) said he’d be “skeptical” about waiving rent for banks. “Why should profit-making corporations be given rent-free facilities on military bases?” he said. “Why should they enjoy that benefit? How do they limit it just to the community banks? I don’t think legally they could.”

The Senate language would prohibit “any requirement for secretaries of the military departments to provide no-cost office space or no-cost land lease to any insured depository institution or insured credit union,” according to the committee report accompanying the bill. The Pentagon should ensure that any decision to provide rent concessions to private businesses is based on a solid cost-benefit analysis, the report said.

Banks, in particular smaller community banks, say they are fighting against a credit union monopoly on military bases, and for many of them, it’s a struggle to survive. Often, when the banks have to renew their leases on bases, rents go up and it becomes impossible to do business, said Steve Lepper, the president of the Association of Military Banks of America. Lepper, a retired Air Force major general, said it’s his mission to change matters.

When one of the banks leaves, “you have a monopoly and that is the case on 40% of the bases,” Lepper said in a telephone interview. Fifteen years ago, he said, there were banks on 130 installations, while today there are only 70 bases housing banks. While several banks have kept ATM-only services on the bases, the association does not consider such footprint an example of full financial services.

“Since 75% of on-base banks are community banks with very small margins, every dollar counts. It’s no surprise that this disparate treatment has led to banks leaving more than 40% of our bases. That number grows each year,” Lepper and other bank representatives, including the American Bankers Association, wrote to the leaders of the House and Senate Armed Services panels in late August.

In the past six years, 26 banks either closed their military branches or reduced their services to ATM-only, according to a fact sheet accompanying the letter. Both banks and credit unions are subject to the same laws and regulations and undertake the same commitments when they agree to operate on military installations, the fact sheet said.

To contact the reporter on this story: Roxana Tiron in Washington at rtiron@bgov.com