The number of claims for loan forgiveness by students saying they were defrauded by their colleges has grown to nearly 300,000, Education Secretary Betsy DeVos told House lawmakers Thursday.

Still, the department expects to clear the backlog in the next 12 months—absent any court challenges to a new debt cancellation formula adopted by the Education Department.

DeVos told members of the House Education and Labor Committee the new formula announced this week will allow the department to assess the circumstances and financial harm suffered by each applicant. 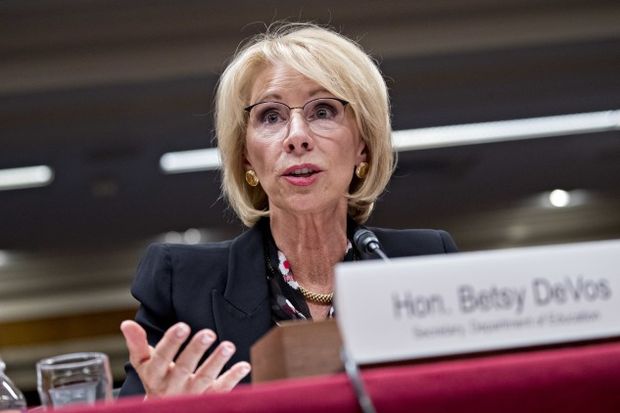 “We address each student’s situation and experience individually,” she said. “That’s why we have a process in place.”

In June, the Education Department said the claims backlog was about 210,000. A department spokeswoman said it was now about 290,000. DeVos blamed the logjam on the department being forced to stop processing claims after a federal court in 2018 ruled against its old formula for deciding relief.

House Democrats have pressed DeVos for months to answer why the Trump administration stopped approving loan forgiveness claims more than a year ago for borrowers who attended defunct for-profit colleges. A standoff between the department and the Democrats appeared to reach a head last month when Rep. Bobby Scott (D-Va.), the chairman of the Education and Labor Committee, threatened to subpoena DeVos before she agreed to release documents on the department’s debt relief policies.

Scott called the insistence on providing partial relief “mystifying” in response to the new formula’s announcement.

Federal law allows students who were misled by their school to seek cancellation of their federal student loans through a process known as borrower defense. The majority of claims came from former students of the for-profit Corinthian Colleges and ITT Tech chains.

“Instead of providing defrauded borrowers full and timely relief—as the law allows—the department halted processing of claims so it could invent a new formula that ensured most defrauded borrowers would get only a fraction of the relief they were eligible to receive,” Scott said.

Debt relief for student borrowers has become a top source of friction between DeVos and Congressional Democrats, who view her department as overly sympathetic to for-profit colleges at the expense of students. Under DeVos, the Education Department has rolled back rules issued by the Obama administration designed to crack down on for-profits.

DeVos said Thursday the approach under the Obama administration was “all or nothing” but the new partial relief standard she introduced this week as scientifically defensible. Democratic lawmakers however questioned the plan’s validity.

Rep. Susan Wild (D-Pa.) cited a critique of the plan from Douglas Webber, an assistant professor of economics at Temple University, who said the formula “misapplies fairly basic statistical techniques in a way that makes it materially harder for defrauded students to find relief.”