(Bloomberg Government) — Saudi Arabia and other countries with records of human rights abuses spend tens of millions of dollars every year to put their best faces forward in Washington.

They hire lobbying firms whose rosters include former members of Congress, high-profile former staff, ex-government staffers, and longtime veterans of the influence industry. More than 60 firms represented countries with some of the lowest ratings by the human rights group Freedom House at some point in 2017 and 2018.

“They’re realizing this is how a lot of Washington works. Just as they are cracking down and preventing people from speaking freely in their own countries, they are buying the ability to tell their story here,” said Adotei Akwei, Amnesty International USA’s deputy director for advocacy and government relations.

Saudi Arabia, whose leaders have been implicated in the murder of journalist Jamal Khashoggi, has spent about $24 million on lobbying and public relations since the beginning of 2017, according to government disclosure reports.

The kingdom has more than a dozen firms on retainer, including Hogan Lovells, which employs former Sen. Norm Coleman (R-Minn.).

More than $25 million was spent in 2017-18 by entities with ties to the government of China, and the United Arab Emirates dropped more than $29 million, including $10.5 million spent since the beginning of 2017 on an advisory firm run by former Treasury Department officials. 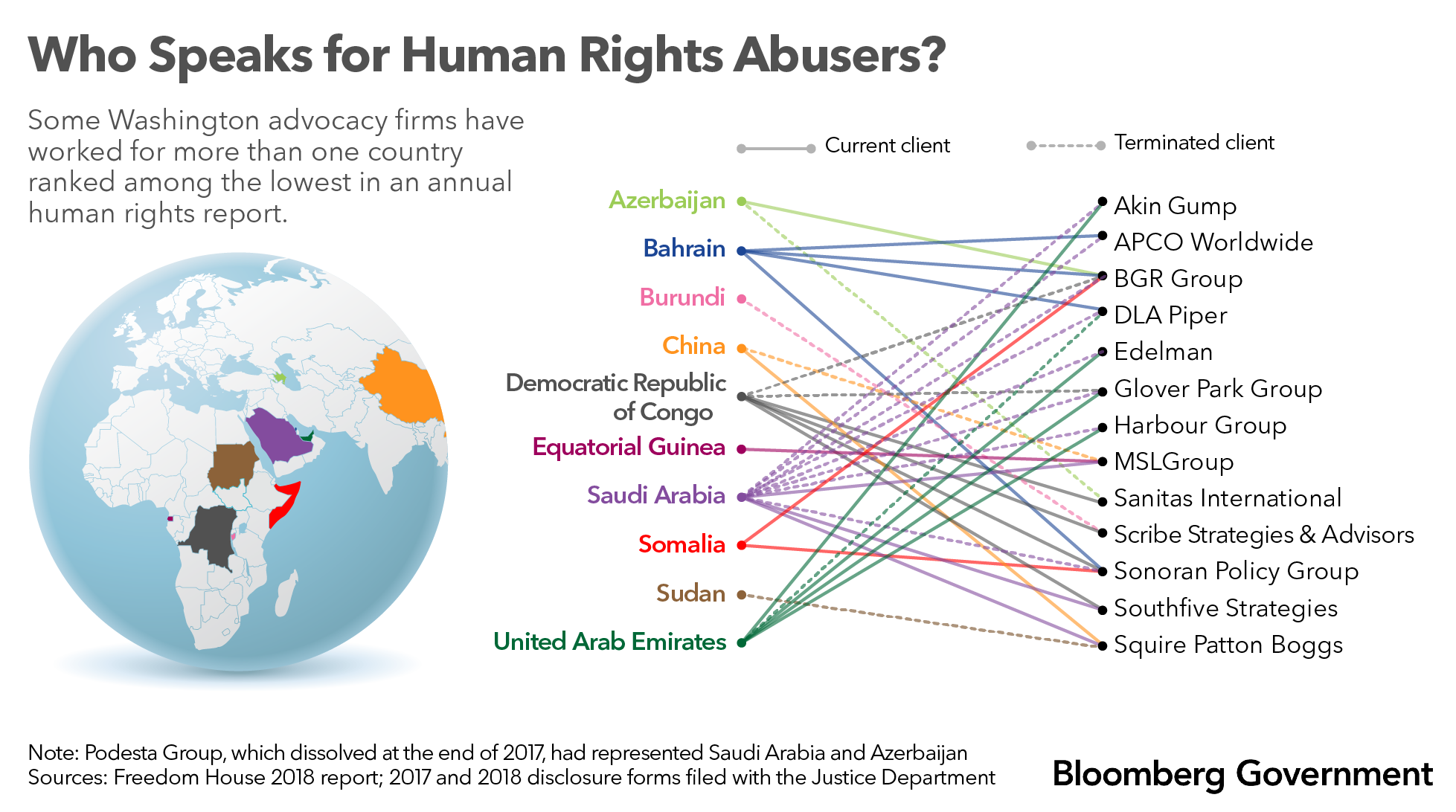 “Nations with even the most notorious human rights violations don’t have a problem finding a lobbying firm to represent them,” said Craig Holman, a lobbyist at Public Citizen.

Freedom House, a non-profit human rights group partially funded by the U.S. government, does an annual analysis of political liberties and civil rights around the world. Bloomberg Government analyzed disclosure filings from the 12 nations with the worst human rights records that also hired lobbying, public relations, or consulting firms.

More than a dozen K Street shops had multiple clients among the 12 countries at some point in 2017 and 2018.

For instance, MSLGroup is Saudi Arabia’s longest-serving public affairs firm in Washington, with their relationship beginning in 2002.

“If the United States doesn’t have a dialogue with the country, you can’t improve conditions in that country,” said Christopher Harvin, co-founder of Sanitas International, who represents the Democratic Republic of Congo and formerly worked for Azerbaijan.

“We’re often helping them overcome these criticisms so they don’t make those mistakes again,” said Harvin, who advised the Trump campaign and served in the George W. Bush administration.

–With assistance from Jorge Uquillas, Jodie Morris and Madi Alexander.