The U.S. Army is planning to use its “other transaction” authority, or OTA, to fast-track six contracts for enterprise information technology services at close to 300 bases around the country, according to Pentagon officials.

“We are using the OTA process to do the prototyping of how to execute EITaaS more rapidly,” Tara Clements, a PEO EIS spokesperson, said in an email. “The flexibility that the OTA process provides us in refining requirements will be invaluable in getting the process right.”

According to an industry day presentation, PEO EIS proposed issuing a total of six OTA awards to support three distinct lines of effort, or LOEs:

The current plan calls for making four awards by the end of August 2019 and two more in fiscal 2020. The first prototype projects will begin at Army installations in the southern U.S.: Army Futures Command Headquarters in Austin, Texas, Fort Polk in Louisiana, and Fort Benning in Georgia. In fiscal 2020 and 2021, the Army will scale these capabilities at bases in the American Midwest and Northeast, followed by those in the Mountain West and along the Pacific Coast. However the Army may revise th at schedule based on industry feedback. 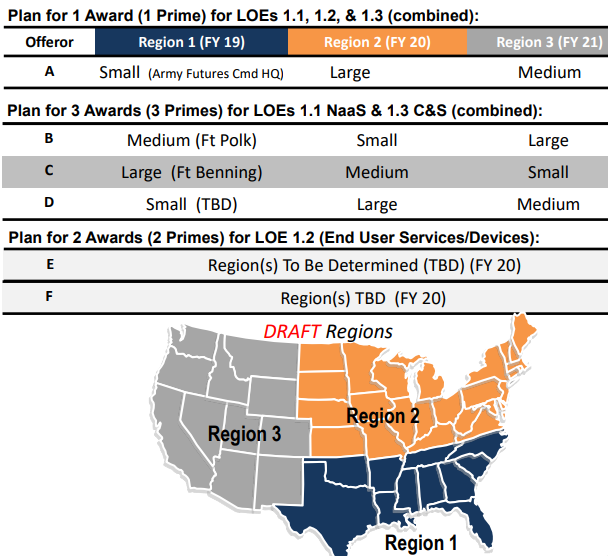 “We’re looking for transformational approaches and we’re interested in all ideas from all vendors,” Clements said. “Our team has leveraged lessons learned from the joint service and interagency partners and we’re committed to encouraging feedback from industry to further inform our acquisition approach.”

The Army’s move mirrors the EITaaS playbook developed by the U.S. Air Force’s Electronic Systems Center, which in fiscal 2018 issued two OTA agreements for NaaS “experiments” worth $87 million and $34 million, respectively, to AT&T Inc. and Microsoft. If that’s the case, each of the six OTA awards the Army plans to issue could be worth $25 million to $100 million or more.

OTAs were designed to enable select federal agencies to expedite funding for research and development and prototyping projects, especially when nontraditional suppliers are involved. Compared with working through the traditional procurement process, OTAs can be awarded faster, they typically involve less red tape, and they are harder to challenge in court.

But according to Clements, the Army plans to use OTAs for only the pilot phase of the program. “Once we’ve completed the prototypes, the implementation phase would most likely be done through FAR contracting with competition,” she said.

“OTAs are just one tool in the procurement playbook,” said Roger Waldron, president of the Coalition for Government Procurement. “It will be interesting to see what unique capabilities the Army can get access to using OTA, and it’ll be important to follow how the program transitions to the FAR process.”

Defense agencies have already spent $2.1 billion through OTAs in the first four months of fiscal 2019 (Oct. 1 to Feb. 7, the most recent day for which data is available, due to the Pentagon’s 90-day reporting lag).

To contact the analyst: Chris Cornillie in Washington at ccornillie@bgov.com