The U.S. and the Taliban are reportedly close to a peace deal in Afghanistan that would result in a withdrawal of 5,000 U.S. troops from that country. Should an agreement be concluded and the troops are withdrawn, defense contracting work in that country could decline by about $920 million per year.

The Defense Department spent $3.8 billion on unclassified contracts for work performed in Afghanistan in fiscal 2018, an increase from the $3.1 billion it spent there in fiscal 2017. Previous Bloomberg Government analysis has shown that defense contract spending in Afghanistan is highly correlated with the level of U.S. troops in that country. Using available data through the end of fiscal 2018 and dividing the annual contract spending by the number of troops in Afghanistan during the same year shows that each U.S. soldier, sailor, airman and Marine in Afghanistan generates about $184,000 in annual defense contract costs, principally for a variety of support services. Using the $184,000 annual figure, a withdrawal of 5,000 troops from the current total of about 14,000 would result in a drop of about a $920 million in annual contract spending. 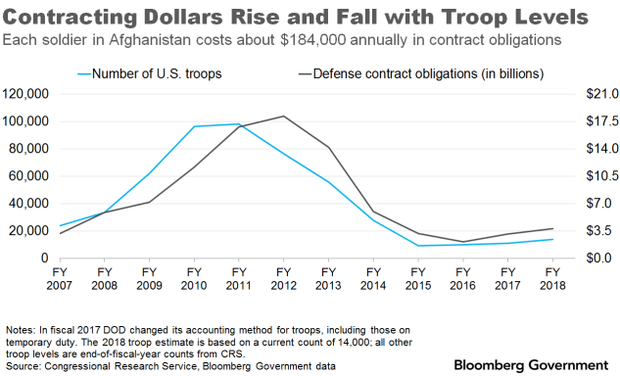 The top contracts for work in Afghanistan since fiscal 2015 have been for various support services, including Logistics Civil Augmentation Program (LOGCAP) IV with $3.4 billion in spending; Theater Aviation Sustainment Maintenance OCONUS (TASM-O) with $712 million, and Warfighter Field Operations Customer Support (Warfighter FOCUS) with $654 million. The top vendor on LOGCAP IV is Fluor Corp.; on TASM-O it’s Dyncorp International Inc., and Raytheon Co. is the top contractor on Warfighter Focus.

Any drop in contract spending is likely to lag behind the fall in troop numbers by several months. Some of the decline may be offset by increased spending to support Afghan forces as they adapt to fighting with less U.S. combat forces in the field. The Afghan government is currently not a party to the talks between the U.S. and the Taliban, and fighting is likely to continue after any withdrawal of U.S. forces.

Contract spending by the State Department may also increase after a U.S. troop withdrawal to support the Afghan government and provide security for State personnel. In fiscal 2018 the State Department spent $774 million on contracts for work in Afghanistan, and Garda World Security Corp. was its top contractor there.

Any peace in Afghanistan is likely to be tenuous, and changes in the situation could lead to a boost in U.S. troops and a concurrent increase in contract spending.

For a list of defense contracts for work in Afghanistan that expire in the next year, click here.