The money the companies—which also include Merck & Co. Inc., AstraZeneca PLC, and Johnson & Johnson— contributed to patient assistance groups and other nonprofits more that doubled from the $321 million donated in 2015, according to tax filings and data provided to the Senate Finance Committee earlier this year. Some of money also went to education grants and fellowship programs for physicians, portions of which were administered through nonprofits, according to an analysis of the data by Bloomberg Government.

This spending dwarfs what drugmakers have spent directly on lobbying or advertising aimed at influencing Congress and the debate over drug prices. However, it’s less clear how this money influences the behavior of the patient groups and what return drugmakers see from it. 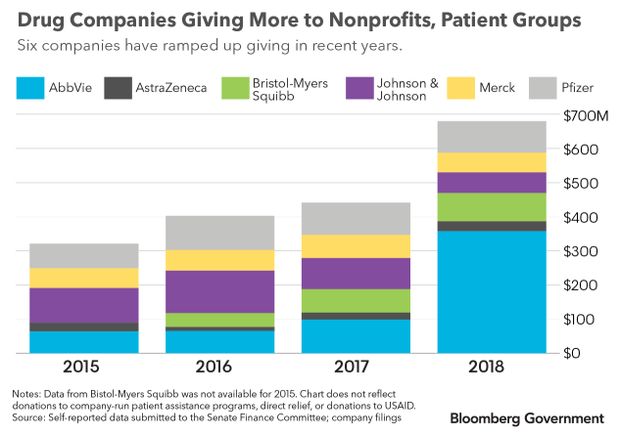 What is clear is that these groups, which offer services that include co-pay and billing assistance as well as advice on navigating hospital and insurance rules, can carry more influence than a drug company because they speak with the voices of people struggling with serious illness, raising the prospect the companies’ support of them amounts to a form of secondhand lobbying.

“It can be difficult for a drug company to go through the front door and argue their case,” Matthew McCoy, an assistant professor in the Department of Medical Ethics and Health Policy at the University of Pennsylvania, said. “It’s generally more effective to give money to patient organizations, which in general have a higher level of public approval than drug companies do.”

The giving comes as Congress considers how to address the cost of medicine in the U.S. The Finance Committee requested the donation data after executives from the six companies testified before the panel earlier this year.

The drug lobby, the Pharmaceutical Research and Manufacturers of America, spent more than $16 million on lobbying through the second quarter of 2019, according to lobbying filings. In all of 2018, the group spent about $27.5 million.

The organizations that have received the most money from these six drug companies support disease research, medical education, and help people pay for their medicines, among other services.

Some of them have also pushed a legislative agenda that aligns with many of the pharmaceutical industry’s own interests.

The nonprofit that’s garnered the most donations from the six companies over the past three years, the Patient Access Network Foundation, joined a list of patient groups writing in July to the Finance Committee warning of “unintended consequences”—such as making it harder for Americans to get certain medicines— of the panel’s proposal to make changes to Medicare’s prescription drug benefit program.

“As you well know, significant changes could alter the dynamics of the benefit, result in unintended consequences and create barriers that would affect beneficiaries’ access to Part D prescription drugs,” the groups said in the letter.

The groups, as the drug industry has done this year, also praised the committee’s move to create an out-of-pocket cap on Medicare’s prescription drug benefit program.

Maggie Naples, a spokeswoman for the foundation, said the group’s advocacy work isn’t influenced by drugmakers. She said the foundation generally gets involved in issues that affect out-of-pocket costs for prescriptions drugs.

Drug companies say they get expert knowledge around disease management and patient support from these groups—not friends on Capitol Hill.

Adelle Infante, a spokeswoman for AbbVie, said her company specifically seeks information about certain conditions related to the products it sells when deciding what groups to fund.

Asked about whether they specifically fund groups that advocate on drug policy, Sharon Castillo, a spokeswoman for Pfizer, said the company does look to give to organizations that “expand access to medicines and vaccines, as well as further the incentives for scientific innovation.”

A spokesman for Johnson & Johnson referred questions to the company’s website, which spells out the company policies for interacting with patent groups.

AstraZenca, Brisol-Myers Squibb, and Merck representatives did not return requests for comment.

Some patient groups take pains to avoid any appearance the money they get from drugmakers influences their advocacy work.

Chris Wilson, the vice president for advocacy communications for the National Patient Advocate Foundation, said her group has scaled back some of its annual Capitol Hill visits in recent years after drug companies asked them to.

“A lot of funders won’t fund anything that involves lobbying or legislative asks,” Wilson said.

The group, along with its affiliate, the Patient Advocate Foundation, received more than $81 million in the past three years from the six drug companies. The foundation recently backed Medicaid expansion in Virginia and fought against step therapy policies that require doctors to first prescribe medications specified by an insurer, typically generic, before they can prescribe certain, often high-cost, medicines.

Wilson’s group hosts an annual Patient Congress, where people who have struggled to pay for medicines or hospital bills come to Capitol Hill to tell their stories. This September nearly three dozen people who’ve faced high medical bills and gotten assistance from the group came, she said.

The group records the stories and uses them in its advocacy and fundraising efforts.

This September, Wilson said, the group decided to limit its visits with legislators.

“Our advocates love the Hill day part, they like running around the Capitol,” she said. “We just feel it might not be the best use of their time.”

“We just want to remove the question, the perception that might be out there,” she said. “Just take it out of the picture.”

Christina Brady in Washington also contributed to this story.