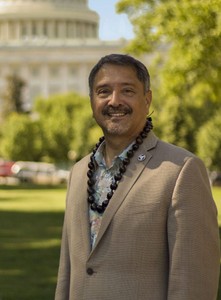 Michael “Keawe” Anderson, is a Native Hawaiian who grew up on Maui, Hawaii, and is passionate about advancing Native economic development. He is the principal advocate for NACA on policies and programs impacting the participation of Tribes, Alaska Native Corporations (ANCs), Native Hawaiian Organizations (NHOs), and tribally owned enterprises in the federal government marketplace.

As Executive Director, Mike represents Native community-owned businesses, encompassing over 600,000 tribal members/shareholders. These businesses provide quality products and services to their federal customers, and apply profits earned from these government contracts to the benefit of their communities.

In protecting, advocating, and advancing the NACA priorities and interests, Mike nurtures positive relationships with senior executives and policy makers in Congress and the Administration, with other like-minded associations and advocacy groups, and with the national and local media. He also ensures NACA Members are kept up-to-date on federal legislation, policies, and regulations – especially the Small Business Administration’s 8(a) Business Development Program – as they affect NACA members.

Mike is a graduate of the United States Air Force Academy, has a master’s in business administration from the University of Northern Colorado, and a master’s degree in strategic military studies from the Air University. He holds a certificate in government contracting from the George Washington University.