Republicans and Democrats in Congress unveiled spending legislation that would avoid a government shutdown through September while giving President Donald Trump only a fraction of the money he wants for a border wall — if he’s willing to sign it.

The plan, released shortly before midnight, provides $1.375 billion for 55 new miles of border fencing, far short of the $5.7 billion Trump sought to build the wall on the U.S.-Mexico border. The president has indicated he’ll probably reluctantly accept the deal, although he said the White House will look for “landmines” before he decides whether to sign it.

The Senate will probably go first on the legislation, followed by a House vote to send the measure to Trump for his signature, according to a House Democratic aide. A single senator could object to a vote today, causing a delay.

The seven-bill package must be enacted before midnight Friday to avoid forcing government agencies to shut down again. The measure would fund nine government departments through the end of the fiscal year on Sept. 30, including Agriculture, Commerce, Interior, Justice, State, Transportation, Treasury, and Housing and Urban Development. Also funded would be independent agencies like the Food and Drug Administration and Environmental Protection Agency.

Democrats said the bill provides $1 billion for the Census while housing programs will get a $1.3 billion boost. As a bargain with Trump on infrastructure remains elusive, the package includes $1.2 billion more for such purposes. The bill would give federal civilian workers a 1.9 percent pay raise, overriding a pay freeze signed by Trump during the shutdown.

The package does not include several authorization measures lawmakers debated, including the Violence Against Women Act, a two-year intelligence authorization measure and a measure that would provide back pay for government contractors who weren’t paid during the shutdown. Read the latest from Erik Wasson and Anna Edgerton. 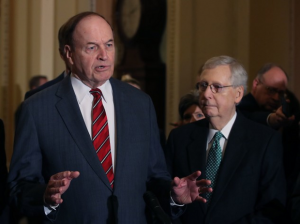 Photo by Mark Wilson/Getty Images
Senate Appropriations Chairman Richard Shelby, one of the chief negotiators of the spending bill.

Barr Seen Ramping Up Immigration Crackdown: Trump’s pick for attorney general, William Barr, is in line to be confirmed by the Senate today. Barr may pack more punch as Trump’s attorney general than his predecessor Jeff Sessions at carrying out a hard-line White House immigration agenda, groups following the issue say. He’d take up the mantle set by Sessions, who in two years aggressively defended Trump‘s policies, some of which led to the separation of families and thousands more individuals in detention centers. Michaela Ross has more.

Curbing U.S. Role in Yemen Conflict: The House voted to direct Trump to withdraw U.S. forces from the Saudi-led conflict in Yemen as part of an effort to step up oversight of foreign policy following lawmakers’ criticism of the president’s moves on Saudi Arabia, Syria and Afghanistan. The resolution, passed 248-177 yesterday, would require the president to remove U.S. armed forces from hostilities “in or affecting” Yemen within 30 days of enactment unless authorized by Congress.

The Republican-controlled Senate passed a similar measure late last year following the killing of columnist Jamal Khashoggi at the Saudi consulate in Istanbul. Sen. Chris Murphy (D-Conn.), a member of the Foreign Relations Committee, predicted that the House measure, H.J. Res. 37, will also pass the Senate and head to the president’s desk. The administration has said Trump will veto it.

The bill introduction comes a day after the Democrat-led House Judiciary Committee advanced two background checks bills that the House could vote on.

Device Tax Repeal: Eight lawmakers, including four Democrats, are starting a new push for medical device makers to avoid paying a fee on sales of their goods in 2020. Led by Rep. Ron Kind (D-Wis.), the members urged their colleagues in a letter, obtained by Bloomberg Law, to co-sponsor a yet-to-be introduced bill that would abolish the medical device tax for good. The tax, a component of the Affordable Care Act, requires a 2.3 percent excise tax on sales of medical devices—anything from MRI machines to tongue depressors. It’s intended to counterbalance the cost of providing nationwide coverage, but its implementation has been delayed twice. If Congress doesn’t act, the tax will go into effect Jan. 1, 2020.

Republicans have generally disliked the tax more than Democrats. But some Democrats want the device tax repealed as well. Ayanna Alexander has more on the state of play.

Serial Presidential Candidate LaRouche Dies: Lyndon LaRouche, the prolific publisher who saw rampant conspiracy in politics, spent five years in prison for tax fraud and accumulated 1.3 million votes during eight bids for the U.S. presidency, has died. He was 96. LaRouche died Tuesday, his political-action group LaRouche PAC wrote on its website, without describing a cause of death. He had lived since 1983 in Loudoun County, Virginia.

In his public campaigns and treatises on history and economics, LaRouche called for a return to fixed exchange rates, expansion of nuclear power, quarantine of AIDS patients, a global restoration of railroad transport and the colonization of Mars. While announcing his seventh presidential campaign, in 1999, he warned that the world economy was built on a speculative bubble and was approaching collapse — a prediction that his supporters later pointed to as evidence of his credibility. Read more from Laurence Arnold.

China Tariff Extension: Trump is considering pushing back the deadline for imposition of higher tariffs on Chinese imports by 60 days, as the world’s two biggest economies try to negotiate a solution to their trade dispute, according to people familiar with the matter. The president said Tuesday that he was open to letting the March 1 deadline to more than double tariffs on $200 billion of Chinese goods slide, if the two countries are close to a deal that addresses deep structural changes to China’s economic policies — though he added he was not “inclined” to do so. The people said that Trump is weighing whether to add 60 days to the current deadline to give negotiations more time to continue. Read more from Jenny Leonard, Jennifer Jacobs, Saleha Mohsin and Haze Fan.

Auto Tariffs: No American industry is lobbying hard for them. Most economists think they’re a bad idea. Even some trade hawks in Trump’s administration see them as a roadblock in his overhaul of the global trading system. That helps explain why tariffs on imported vehicles and auto parts — the next possible play in Trump’s trade war — are so unpopular.

Still, by Sunday, the Commerce Department will deliver to Trump the results of an investigation into whether U.S. car imports stemming from the decades-long push toward a global automotive industry represent a threat to national security. Commerce Secretary Wilbur Ross can recommend options for the president, potentially leading to levies up to 25 percent on imported vehicles and parts. Read more from Ryan Beene, Chester Dawson, Shawn Donnan and Mark Niquette.

Trump’s Foreign Policy Discord: In Warsaw today, a U.S. delegation led by Vice President Mike Pence is heading an international meeting focused on the threat posed by Iran. Meanwhile in the Black Sea resort of Sochi a thousand miles away, Russian President Vladimir Putin hosts Iran’s President Hassan Rouhani along with his Turkish counterpart, Recep Tayyip Erdogan, for talks on Syria. The parallel meetings underline the changing balance of power in the Middle East, where Russia has asserted itself as the U.S. seeks to disenga ge, most notably in Trump’s desire to withdraw troops from Syria. They also serve as a reminder of the Trump administration’s leverage to divide Europe.

Trump’s trade tariffs, swipes at the transatlantic alliance and public disparaging of the EU have rattled Brussels, Berlin and Paris. The president’s decision last year to ignore European warnings and abandon the 2015 nuclear deal with Iran prompted the EU to defy Washington and attempt to circumvent U.S. sanctions. As a result, the optics of the U.S. leading a meeting on Iran in an EU member state is galling for some European governments. Read more from Alan Crawford.

Census Question Costs California: The Trump administration’s decision to ask people about their citizenship on the 2020 census could cost a number of U.S. states and cities money, but perhaps none have as much to lose as California. The state, which sued the U.S. last year to block the question, got about $115 billion of $883 billion in fiscal 2016 federal spending guided by census data, according to Andrew Reamer, a professor at George Washington University who worked with the latest data available.

And it’s set to lose more than any other state, California argues, if Secretary Ross wins the battle to add the question — “Is this person a citizen of the United States?” — to the decennial questionnaire for the first time in 70 years. That’s because California is home to the greatest number of immigrants and Hispanics in the U.S., many of whom, fearing the government’s intent, won’t answer the question and won’t be counted, the state claims. Read more from Joel Rosenblatt.

Manafort Lied to Mueller, Judge Says: Paul Manafort lied to the FBI, Special Counsel Robert Mueller and a grand jury about a payment to a law firm and his interactions with Konstantin Kilimnik, a translator with whom Manafort worked in Ukraine and who Mueller claims has ties to Russian intelligence, a judge ruled after two closed-door court sessions to consider the issue.

U.S. District Judge Amy Berman Jackson however found that Mueller failed to persuade her that Manafort lied over Kilimnik’s role in an obstruction of justice conspiracy and that he lied about his contacts with the Trump administration. She said she won’t decide at this time whether Manafort should get credit for his acceptance of responsibility when she sentences him March 13. Read more from Joe Schneider.