The runoff to choose Louisiana’s next governor offers President Donald Trump one last test of his popularity with his Southern base before the 2020 presidential election.

Trump’s about to make his third appearance for Baton Rouge businessman Eddie Rispone. They’re scheduled to be on stage together tonight in Bossier City, just outside Shreveport.

Trump has become inescapable to anyone in Louisiana who watches TV. He stands at Rispone’s side in the Republican’s ads. Less predictably, a commercial by a group favoring the re-election of Democrat John Bel Edwards tells television viewers, “Eddie Rispone is no President Trump. Trump cuts taxes.”

That spot criticizes the challenger for wanting a constitutional convention that Edwards says could jeopardize the state homestead exemption and spike property taxes. 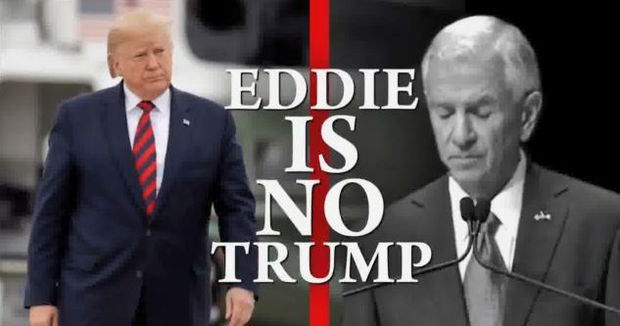 Image from an ad by Restore Our Coast, which supports the re-election of Democrat John Bel Edwards.

Edwards, an attorney and former Army Ranger, is trying to maintain his position as the only Democrat serving as governor in the Deep South.

Edwards’ campaign has highlighted his expansion of Medicaid in the state, as well as bipartisan support for initiatives to reduce the state’s prison population and to turn a $2 billion budget deficit into a surplus.

His military service and pro-gun, anti-abortion stances may appeal to some Republicans who didn’t support Rispone in the all-party primary. Edwards came out of the primary on top with almost 47% of that vote, but less than the majority he needed to win outright. Rispone took 27%, pushing out another top Republican, U.S. Rep. Ralph Abraham.

Since then, Edwards and Rispone have sparred primarily over the emotions being stirred up by the ads aired by their backers.

Rispone accused Edwards of “playing the race card” after radio spots by the Black Organization for Leadership Development compared Rispone and Trump to white supremacist David Duke, who ran for governor in Louisiana in 1991. Edwards called the political group’s leaders to have them stop airing the ads.

“These ads have been disgracefully false from the beginning, and now a Court of Law has made that official, instructing Eddie Rispone’s allies to pull the ads immediately,” Edwards campaign spokesman Eric Holl said in an emailed statement. “Eddie Rispone and Lane Grigsby should be ashamed of these false attacks on two distinguished veterans.” Grigsby is the founder of the group Truth in Politics.

A pro-Rispone TV ad paid for by the RGA Right Direction PAC, an organization supported by the Republican Governors Association, features the candidate who lost to Trump in 2016, Hillary Rodham Clinton.

Image from an ad by RGA Right Direction PAC

Rispone, who has largely self-funded his campaign, has spent $4.13 million on television ads throughout the campaign, while Edwards has spent $3.49 million, according to data compiled by the tracking firm Advertising Analytics. Gumbo PAC, a Baton Rouge-based Super PAC, has spent an additional $4.56 million on ads supporting Edwards.

When the White House tweeted during Trump’s Nov. 6 rally about Louisiana’s dropping unemployment rate and other highlights about the state’s economy, Edwards’ campaign took a bow.

Sharing a stage with the president and a couple members of the “Duck Dynasty” family that night, Rispone said a vote for him was a vote to support Trump.

“John Bel Edwards would want you to believe he’s not one of those liberal lunatics that are trying to impeach our president. We can send a message to them by voting me in,” Rispone said.

Saturday’s election is the last of three governor’s races this year.

Republican candidates in all three states made fealty to Trump the center of their campaigns, and so far, only one of them has won.

If Beshear ends up prevailing, he’ll have something in common with Louisiana’s Edwards, who in 2015 benefited from voters’ dislike of his Republican opponent, then-U.S. Sen. David Vitter.

One of the lessons from Kentucky exit polls was that Trump still enjoyed a “nontrivial amount of support” among voters who cast ballots for Beshear, said University of Pennsylvania political science professor Daniel J. Hopkins, who explores the nationalization of state politics in his book, “The Increasingly United States.”

“A successful campaign by a Democrat in Louisiana is going to have to attract a sizable number of people who voted for the president and support the president,” Hopkins said in a telephone interview.

To contact the reporter on this story: Jennifer Kay in Miami at jkay@bloomberglaw.com

To contact the editors responsible for this story: Katherine Rizzo at krizzo@bgov.com; Loren Duggan at lduggan@bgov.com